The year 2020 is drawing to a close. One can only imagine what will come next. According to Deutsche Bank strategists, the era of globalisation, which has lasted for almost four decades, is coming to an end and will be replaced by the “age of disorder”1See The Age of Disorder — the new era for economics, politics and our way of life, Deutsche Bank, 9 September 2020.. Numerous unpredictable events and potential divergent paths lie ahead, and, as they say, no one knows which way we will go. However, even developments today are to a large extent indicative. For example, in public discourse pent-up demand for security is strengthening compared to the desire for freedom. From the state’s perspective, this translates into the tightening of controls, which have clearly been enjoying more public understanding, if not outright support. Tolerance of everyday restrictions and interference in private life has increased, inter alia, amongst the higher strata of society. This may also be true of political restrictions.

The value of the inviolability of private life is being degraded in line with the manipulation of individual interests and requirements which are being created artificially: this is a new trend which would appear to be here for the long haul. And all this is happening against a surge in populism: political systems appear unable to consolidate to block populist politicians, whereas the ability of the traditional elite to retain their role as a politically responsible class has weakened significantly.

The networking of communications, opportunities for allcomers to take centre stage, devaluation of the opinions of experts and specialists against the backdrop of a distorted, showtime flow of news and online anonymity  — all these factors increase sharply the chances of a leader by happenstance (See «Information ochlocracy»). The worldwide web, which has been voluntarily or forcibly turning people inside out, combined with populism in the form of political farce, has become a material factor in politics and public life. Information technologies are freeing up the darkest sides of human nature and sometimes not even populist, but instead absurd theories and bringing them to the surface.

Take, for example, QAnon2QAnon, Wikipedia — a conspiracy movement based on the conviction that the leadership of the US Democratic Party and a number of American celebrities worship Satan and are involved in a vast international sex trafficking ring of young children. This movement appeared at the end of 2017 and since then has managed to attract tens of thousands of rank-and-file Americans and also celebrities3See H.Res.1154 — Condemning QAnon and rejecting the conspiracy theories it promotes, US Congress, 2020. QAnon has been behind the transmission of a so-called “comprehensive conspiracy theory”, which brings together virtually all well-known conspiracy theories, mystifications and the figures involved. In just three years a whole sub-culture has evolved around the ideas of “new conspiracy theorists”, with millions of screenings on YouTube, the sale of QAnon branded clothes and accessories. However, recently QAnon’s ideas have been openly expressed by politicians (including new US Congress members4See QAnon promoter Marjorie Taylor Greene wins seat in Congress, CNN, 4 November 2020): in social networks they write in earnest about the harm posed by vaccines and the implantation of microchips. 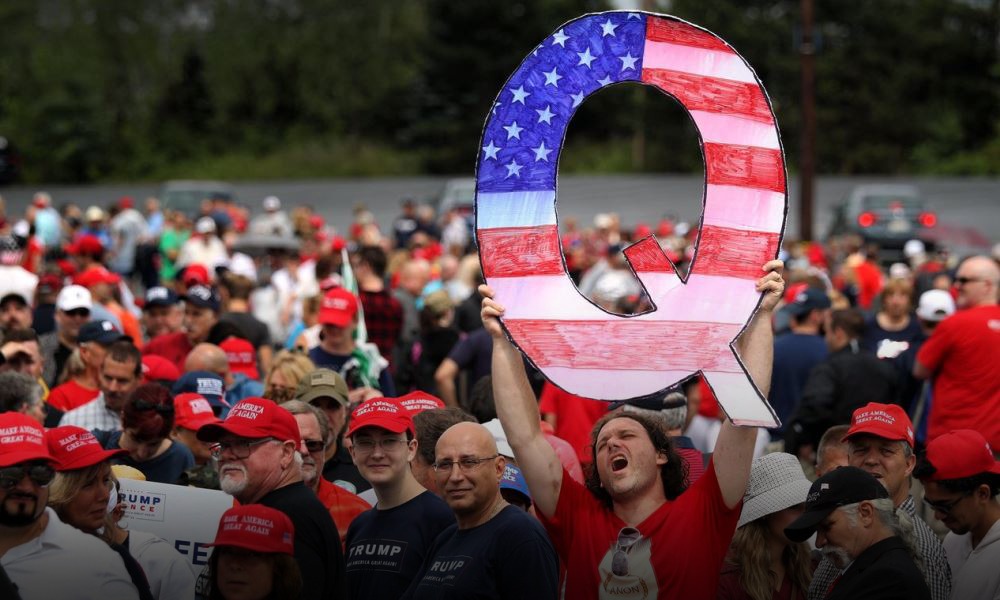 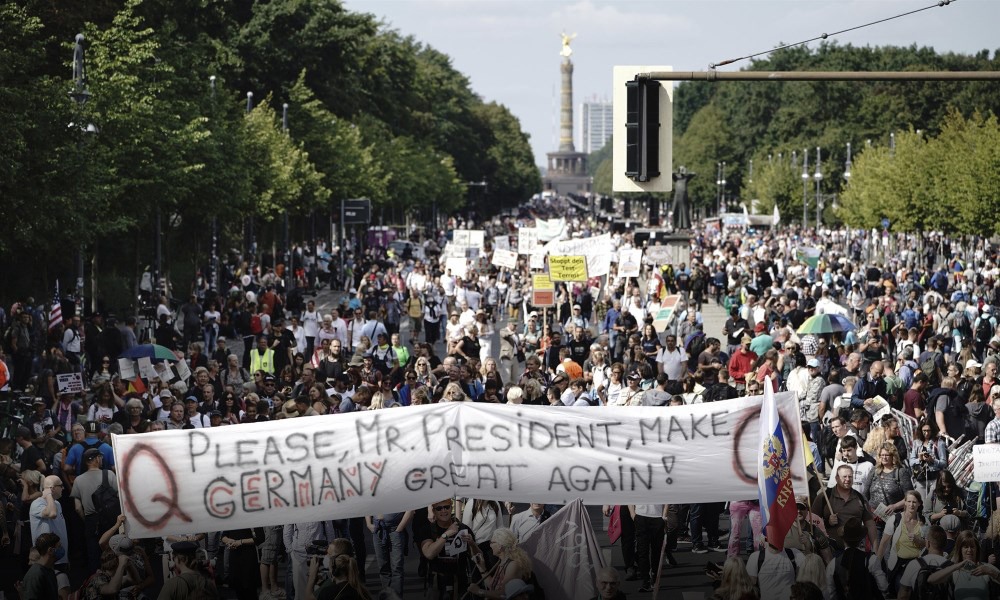 The influential power of QAnon’s theories on American society is demonstrated by poll results. For example, 44% of the electorate of the US Republican Party are convinced that Bill Gates wants to use a COVID-19 vaccine as a pretext for implanting chips in people and thereby monitoring them5See New Yahoo News/YouGov poll shows coronavirus conspiracy theories spreading on the right may hamper vaccine efforts, 22 May 2020. QAnon has rapidly broken free of the Internet into real life: the most dynamic and grassroots conspiracy movement has even assumed a life of its own without any creators, and is already having a global impact. Groups against Bill Gates on Facebook have attracted hundreds of thousands of participants from all over the world. In May 2020, real mass protests swept through New York and London over the “attempts” of Microsoft’s founder to “implant chips in people and commit world genocide through coronavirus inoculations”. In spring 2020 vandals in Great Britain attacked dozens of telecommunications towers that followers of conspiracy theorists cite as one of the reasons for the spread of COVID-196See How false claims about 5G health risks spread into the mainstream, 7 April 2020. .

In the USA over 60 million people are convinced7See Nothing to see here — The Republican Party and Donald Trump’s alternative election fantasy | United States, The Economist, 14 November 2020. that the results of the most recent presidential elections may well have been falsified. This means that in his four years as President Donald Trump managed to achieve something that all the opponents and enemies of the United States had failed to do during the past two hundred years – starting with the Apache and ending with the Al-Qaeda terrorists. The long-abiding belief of the American people in elections has been undermined. And that is not all. Such key democratic institutions as the judiciary and the press have been jeopardised as well.

On the other hand, it is specifically during Trump’s term as US President that the movement Black Lives Matter became  really mass and nationally widespread (as well the race riots did). And today it is highly unlikely that the genie can simply be put back in the bottle. The radical ideas of Black Lives Matter, which are extremely similar to the class divide at the end of the 19th and start of the 20th centuries, will trigger an even greater rupture in American society.

The lack of trust in key institutions, the hatred of elites and their weakness, the increasing society atomisation and inequality of opportunity, the emergence of class-like mass protest movements – these are all manifestations of an impending crisis. And it goes without saying that this has nothing to do with the specifics of the recent presidential elections in the USA when significant issues were side-lined – not simply treated as secondary issues, but instead put on the back burner, as the media constantly chewed over the scandalous details of the private lives of the candidates. The crisis is marked by the strengthening of the positions of a totalitarian consciousness, as opposed to rational thinking.

Totalitarian consciousness (not necessarily in extreme sectarian forms) is inclined to perceive any political conflict not as a competition between alternatives, but rather as a confrontation between the Truth and Falsehood. And such a vision proved very popular at the most recent US presidential elections. Naturally this is not a new phenomenon for Americans. However, whereas in the past foreign dictators would as a rule personify falsehood and lies, today such evil is already permeating the country. The damage caused over the past few years to American institutions is not that notable at present, but will definitely make itself felt over time.

How do you overcome this crisis and rectify all the damage? We are not talking here about merely cleaning up the house after some seedy con artist threw his weight around. In actual fact, the aspirations to turn back the clock and return to some past order, to simply sit out the storm that has enveloped the whole world – this brings us very close to the Trumpian “Great Again” overtones and is far removed from reality. The political crisis in the USA, as incidentally is the case everywhere in the world, cannot be resolved just by Joe Biden’s victory. It is clear that fundamentally new solutions are needed. The first step we need to take is specifically to realise how and why the world has changed over the past three decades.

Meanwhile digital platforms are being transformed at breakneck speed by populists into breeding grounds of far-right ideas and practices. It is well known that populism can easily be converted initially into nationalism and then into fascism. Populist ideas underpin authoritarian corporate states, stand behind monopolisation in the economy and politics, engender claims for one’s special mission vis-à-vis the outside world. For it is populism that seeks to convert such phenomena in domestic politics as the unity of the people and the powers-that-be, the fight against external threats as the meaning of the state, the fight against traitors of the country and conspiracies as the basis of security, into defining issues (See «On the political systems of the New Age»).

The process of transforming populism into fascism may assume externally far from threatening forms, and may actually be totally imperceptible from the outside — the façade will remain the same despite the change in content.

The impending era also imposes another acute challenge — the new economy which persistently requires re-evaluation at an institutional level of such key concepts as monopoly, ownership and competition (See «The New Age economy»).

On the whole, from the outside today everything in life looks the same as in the past. However, a vast number of people don’t understand what is happening, feel lost and don’t know what to do. This provides the authorities with an opportunity to convince people that there is no alternative, that a decrease in the degree of freedom of choice is wholly beneficial. It is telling that the slogan “TINA: There is no alternative” has been become extremely popular recently in the West — it was actively used at one point in the past by Margaret Thatcher, who was British Prime Minister at the time.

And in actual fact humankind is entering a new era where it has effectively been deprived of any alternative. In Russia, an uber-authoritative corporate state with an unchanging leadership has been established definitively. In the USA two candidates aged 74 and 77 competed for the presidency and fought so hard that after the elections the country found itself virtually on the verge of civil war. People in Europe are increasingly afraid of refugees from third countries, and populists, if not nationalists, are coming to power one after the other. Meanwhile Communist China is strengthening its industrial and technological  expansion.

A series of articles under the general heading “Political Entropy. Digital Technologies and the Globalisation of Disorder” consider the underlying processes triggering the crisis phenomena in global politics and forming the new age economy. In addition, the publications refer to serious changes in society accelerated by the COVID-19 pandemic in the context of the impact of the fourth industrial revolution, above all, information and communications technologies, on politics and individual lives. In the final analysis, the key issue of our age is whether humankind is capable of determining its future. The goal of this series of publications is to draw attention to the specifics of the new era and to try to map the path ahead.

The author would like to take this opportunity to express his heartfelt thanks to colleagues who were involved in discussions of the articles: V.G. Shvydko, A.V.Kosmynin, G.A. Melamedov and D. Y. Glinski

MORE ARTICLES
30.12.2020 What Should Be Done? Institutionalisation of Values