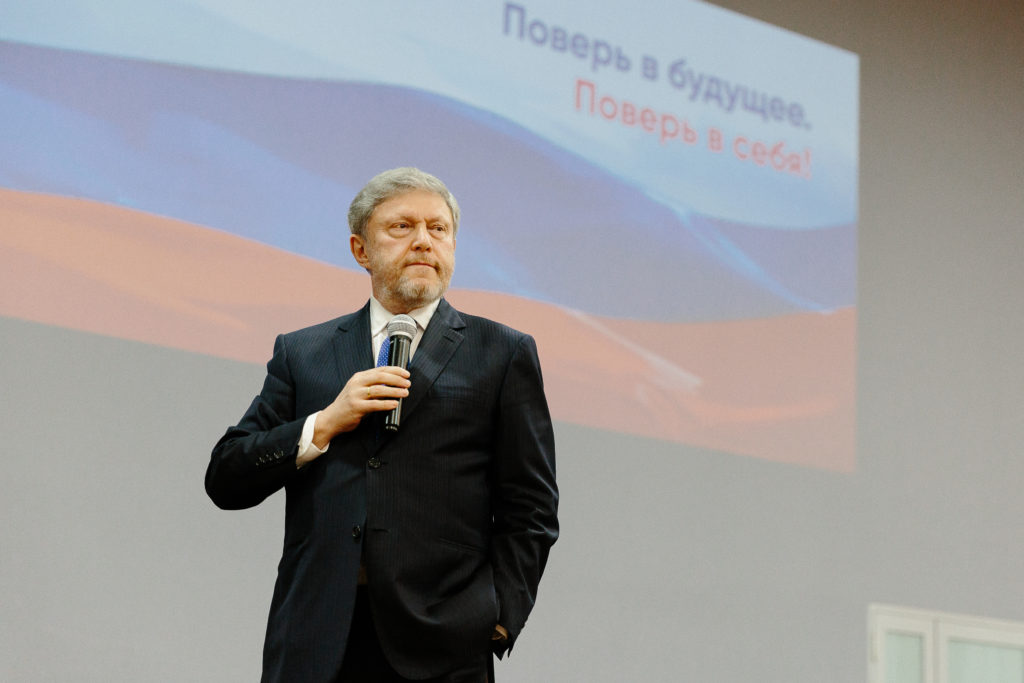 Yavlinsky was born in Lviv on 10 April 1952. His father fought in World War II. After the war, he was head of a distribution centre for homeless children. His mother taught chemistry at university.

Yavlinsky graduated from an evening school for working youth. At the time he worked as a mechanic at a glass-making firm. In 1967 and 1968 he was champion of the Ukrainian SSR in junior boxing.

From 1976 he worked at the All-Union Research Institute of Management at the Ministry of Coal Industry of the USSR. He worked in Kemerovo, Novokuznetsk, Chelyabinsk and other cities.

From 1980 he was appointed head of the heavy industry sector at the Research Institute of Labour of the USSR State Committee for Labour and Social Affairs. From 1984 he was deputy head of the consolidated department, before being promoted to head of the department of social development and population.

In 1989 he was head of the Joint Economic Department of the USSR Council of Ministers.

In 1990 Yavlinsky was appointed Deputy Chairman of the Council of Ministers of the Russian Soviet Federative Socialist Republic (RSFSR) and Chairman of the State Commission for Economic Reform. In this position, he drafted a programme to transform the central planned economy of the USSR into a free market in two years, together with a package of laws for its implementation. It was dubbed the 500 days programme and secured the backing of the Supreme Soviet of the RSFSR and Supreme Soviets of a number of Soviet republics. However, the government of the USSR and the government of the RSFSR reneged on their obligations to implement the programme by autumn 1991. Disagreeing with the change of economic policy, Yavlinsky resigned.

In 1991 Yavlinsky developed a programme to integrate the Soviet economy into the global economic system, known as A Window of Opportunity. After the abortive coup d’état in August 1991, he was appointed Deputy Chairman of the Committee for the Operational Management of the National Economy of the USSR as a Deputy Prime Minister. In this position, in order to preserve a common economic space and links with Soviet republics, he drafted a Treaty on the Economic Community of the Republics of the USSR”. The Treaty was approved by the heads of 11 republics of the USSR and ratified by Russia. However, the Treaty was not implemented due to the trilateral Belovezha Accords (between Russia, Ukraine and Belarus) that brought an end to the USSR. Yavlinsky duly resigned.

From 1992 he was Chairman of the Council of the Center for Economic and Political Research (EPIcenter). Under his guidance EPIcenter prepared comprehensive alternative social and economic proposals to the economic reforms being implemented at the time by Russia’s acting Prime Minister Yegor Gaidar.

In 1993 Yavilinsky formed an electoral bloc with former Russian Chief State Inspector Yury Boldyrev and the academic and diplomat Vladimir Lukin to participate in elections to Russia’s first parliament (known as the State Duma). Journalists called the bloc YABLOKO, based on an abbreviation of the first letters of the surnames of its founders. The bloc was an alliance of several political parties: the Republican Party, the Social Democratic Party and the Russian Christian Democratic Union — New Democracy.

Since 1995 Yavlinsky has been the leader of the Public All-Russian Political Union YABLOKO. In 2001 it was transformed into a political party. In 2001-2008 he was Chairman of the Russian United Democratic Party Yabloko. He has been a member of the Federal Political Committee of the Party since 2008, and its Chairman since 2015.

In 1994-2003 Yavlinsky led the Yabloko faction in the State Duma. Among other laws, the faction initiated the adoption of a law to raise the salaries of budget workers, and a law on the mandatory disclosure of the personal income tax declarations of members of the Government of the Russian Federation. Yabloko advocated the gradual transition to a contract army and the introduction of a flat rate of personal income tax, the lowest rate in Europe, which facilitated an increase in budget revenues and had a significant impact on curbing the influence of the underground economy (black market).

The Yabloko faction was a constructive opposition, and criticised the laws on state budgets for 1996-2000. Since the year 2000 members of the faction developed alternative draft state budgets. The proposals of the faction on additional budget revenues were used by the Russian government in the draft budget for 2001-2003.

Grigory Yavlinsky has also been a constant critic of policies implemented by successive Russian Presidents towards Chechnya. In 1994 he criticised the war in Chechnya. Together with colleagues from Yabloko, he went to Chechnya to hold negotiations with then head of Chechnya Dzhokhar Dudayev, offering himself as a hostage in exchange for captured Russian military, whom the country’s leadership refused to recognise as soldiers. Yavlinsky and his colleagues managed to secure the release of half of the prisoners of the war and the return of the bodies of dead soldiers. In 1999 Yabloko opposed the start of the second Chechen war when the government used bomber aircrafts.

In 1996 Yavlinsky participated in the presidential election as a “third force”, an alternative to Boris Yeltsin and the communist leader Gennady Zyuganov. Yavlinsky came fourth.

In 1999 he voted together with the Yabloko faction in the State Duma for the impeachment of President Yeltsin.

In 2000 Yavlinsky participated in the presidential elections. The election campaign was held under the slogan «For Russia without Dictators and Oligarchs». During the campaign he spoke about the risk of the emergence of a hard-line regime thanks to Boris Yeltsin’s legacy. He came third.

In 2001 Yavlinsky was one of the leaders of the campaign to defend free speech when the state under new President Vladimir Putin seized control of the private TV channel TV, which had criticised the regime and provided an alternative view.

In 2002 during the terrorist act at Dubrovka Theatre in Moscow, when terrorists took 850 theatre goers hostages,  Yavlinsky personally went to the theatre to hold talks with the terrorists. After the negotiations, the terrorists released the eight youngest children being held hostage.

In 2003 Yavlinsky developed a Roadmap of Russian Reforms, a plan for dismantling the oligarchic system and overcoming the consequences of criminal privatisation. In particular, the plan envisaged the introduction of a windfall tax on the super-profits obtained as a result of the loans-for-shares auctions carried out in the 1990s when Yeltsin was President.

In 2011-2012 the Yabloko party participated in major protest actions in the country after the fraudulent elections to the State Duma. Yavlinsky was the only leader of the protest movement to put forward his candidacy for the presidential election in 2012, endorsed by former President of the USSR Mikhail Gorbachev. However, the regime did not register him in the race for political reasons.

In 2014 he opposed Russia’s annexation of Crimea and the war in Donbass, and proposed the holding of an international conference for a peaceful resolution of the Russian-Ukrainian crisis.

In 2018 Yavlinsky participated in the presidential elections in Russia. He presented a plan to resolve the ongoing Russian-Ukrainian military conflict and advocated an end to Russia’s murky operations in Syria. He also proposed the return of direct elections of governors and mayors and advocated the adoption of policies to facilitate the creation of a broad-based middle class in Russia (a programme “Houses — Land — Roads”, personal savings accounts, the abolition of taxes for the poorest population).

After the presidential elections Yavlinsky announced the need to create a grassroots party on the basis of Yabloko in view of the impending domestic political crisis. Such a party would facilitate the transit of power at the end of Putin’s final term as President under the current Russian constitution.

In 2017 Yavlinsky was elected Nominal Vice President of the Liberal International, a political organisation uniting liberal parties around the world.

Since 2005 Yavlinsky has been Professor at the National Research University Higher School of Economics (Moscow). Holding a PhD in Economics, he defended his thesis at the Central Economic Mathematical Institute of the Russian Academy of Sciences.

He is the author of dozens of articles, books, and academic works published at Harvard, Yale, Princeton and Columbia Universities.

Yavlinsky is married and has two adult sons. His eldest son graduated from the Faculty of Physics, Lomonosov Moscow State University, and is a journalist; his younger son is an IT specialist and research engineer on big data, and has a PhD.