At the UN General Assembly Vladimir Putin spoke again about a multipolar world. But a “multipolar world” means that one pole will have almost the whole world, the other will include China with North Korea, while on the third pole there will be Russia separated from everyone else but with Lukashenko, Novichok and missiles. 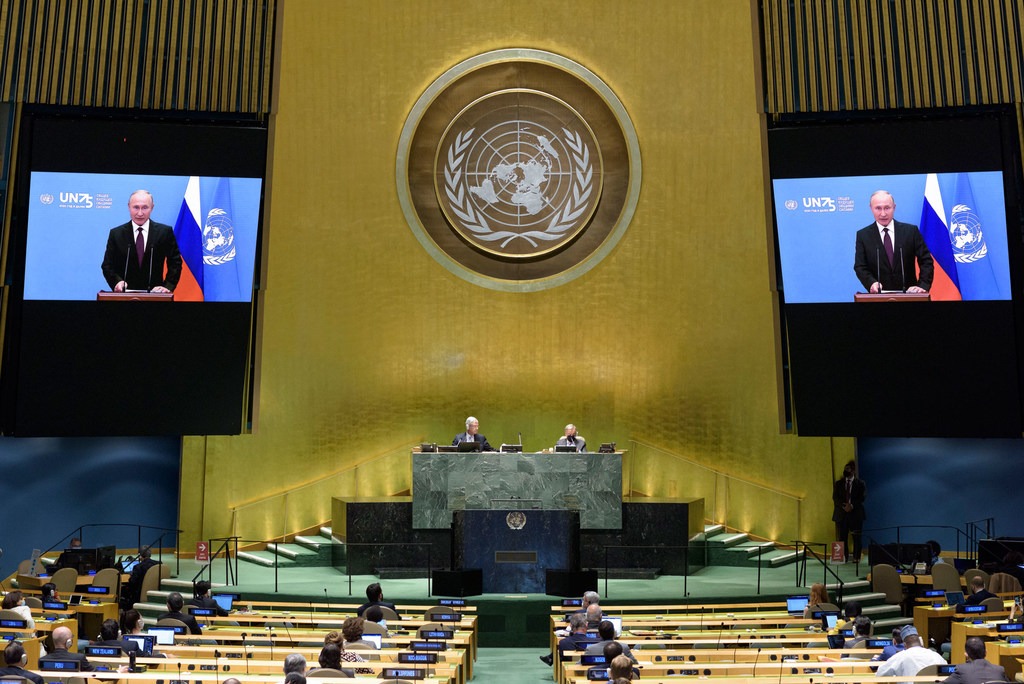 A “multipolar world” in the Lavrov-Putin’s vision means that lies and torture, hybrid wars and “polite people”, dictating to neighboring countries and foreign territories occupation, chemical weapons use and beating up peaceful protesters are acceptable in Russia and the “suburbs”, while the irreplaceable authorities corporation has imposed for decades all these on the people as the only possible way of life.

In this system the only value is the authority itself, its preservation and retention. The idea of ​​“pupation” of the controlled space, rolling it into a “sovereign” cocoon, separated from the rest of the world, serves to this too.

This Putin’s idea is deeply flawed from the outset, because it denies global world as a phenomenon. However, the modern world, even divided and fragmented by the current turmoil, has general patterns and trends, which are completely wrong to ignore in human terms and irresponsible and criminal at the state level.

If you want to be a part of the global world, if you want to participate in decision-making, then you will have to abandon the policy based on the principle “I do what I want”.

By the way, what kind of a “sovereign pole” can we talk when we have such an ineffective economy as that of Russia. What equal rights can the “poles” enjoy when the United States and the European Union have 44% of the world GDP for two of them, China has 16%, while Russia has only 2%. The entire present Russia’s “sovereign pole” is only fear-mongering of missiles (and now also of poisoning substances) at 2% of the world GDP.

So, our “pole” is tiny. We’d better take the lead in the struggle for peace, so that everyone would be together, so that to sit at the table – either in G5, or G7, or G8 – and make decisions. But Putin with his “multipolar world” can only sit together with Lukashenko.

This is the key difference between the national interests and the interests of the government. For Putin the main goal is the self-preservation of the current ruling corporation, while the national interest and patriotism are loyalty to the authorities. However, this understanding deprives the country and the people of the future. The Russian state – and it should be regarded as an institution, rather than a collection of personalities – has been destroyed and delegitimised by such a policy. All real values ​​- Christian, European, national, and any values in general – are crudely instrumentalised, adapted to the pragmatic tasks of retaining personal power. This also applies to the Victory in the WWII, which in the Putin’s system is used as a prop for phantom claims for a “new Yalta”.

Finding the way out of the dead end and gaining perspective are in the opposite direction: it is in the politics of common fundamental values ​​and principles, and all talk about the need to jointly solve common problems will remain talk only without mutual understanding and acceptance of these values and principles by the main global actors.

In Huawei’s case, Russia is making a principled choice for many years to come. In terms of technology, and, consequently, from an economic perspective, this choice will transform Russia into a satellite of China.

The 53rd Munich Security Conference opens on 17 February. While…

Europe 27.02.2014 Russia is creating a zone of instability around its borders

The bloody confrontation in Ukraine resulting in the death of…