This week, the Legislative Assembly of St. Petersburg adopted in the third reading amendments to the law on the budget process, developed by the Grigory Yalvinsky, Chairman of the Federal Political Committee of YABLOKO and ex-MP of the Legislative Assembly of St.Petersburg. The amendments will improve budgetary discipline and effectiveness of budget spending in St. Petersburg. Experts believe that Yavlinsky’s proposals can be used in legislation of other regions. 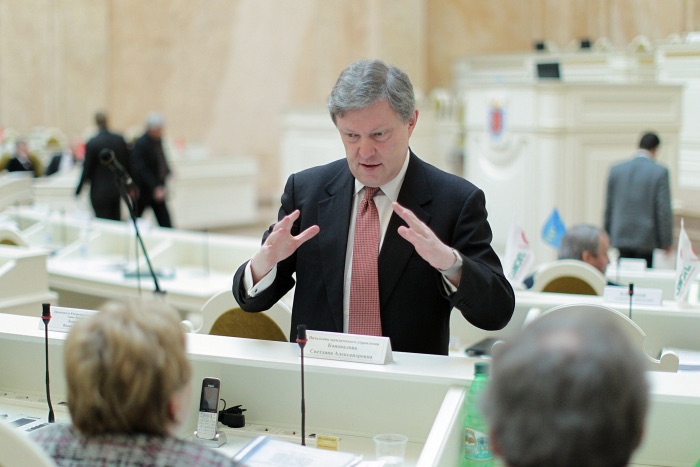 The law was introduced by Yavlinsky into St.Petersburg parliament in December 2015.

Over 15 changes were made to the document. Consequently, one of the key proposals – abolishing the amendment allowing for the non-transparent distribution of 2 per cent the city budget – was removed from the text of the draft law. YABLOKO MPs believe that this norm opens wide scope for corruption in the adoption and execution of the budget. However, the parliamentary majority representing the ruling United Russia party, decided that abolishing of such non-transparent distribution of the funds was not contrary to the Charter of the city.

It is worthy of note that most of the amendments to Yavlinsky’s draft were prepared by deputies Andrei Vasilyev from United Russia and Maxim Yakovlev from the LDPR, Chairman and Deputy Chair of the Budget and Finance Committee, respectively.

“Unfortunately, not all that we wanted was adopted by the deputies, nevertheless, the adoption of the law is a great achievement of the YABLOKO faction [of the city parliament], Yavlinsky’s law will significantly improve the budget process in St. Petersburg,” Mikhail Amosov, MP of the Legislative Assembly from the YABLOKO faction, said.

Despite all the adjustments, the adoption of Grigory Yavlinsky’s law will make the budget process in St. Petersburg more transparent and will help the city to economise considerable funds.

Experts say that a number of norms proposed by YABLOKO for St.Petersburg city budget could be easily used as a model for corresponding laws in other regions. In particular, the provision obliging the authorities to publish a number of budget documents on the Internet: from draft budget laws to implementation of the budget, as well as lists of legal entities getting budget subsidies.

On 22 March, the Legislative Assembly of St. Petersburg adopted…

09.06.2016 «If the majority of Russians vote in the elections in September, the situation will radically change»

According to Grigory Yavlinsky, head of the YABLOKO faction in…