ARTICLES «If the majority of Russians vote in the elections in September, the situation will radically change»
09.06.2016 / St. Petersburg
Share 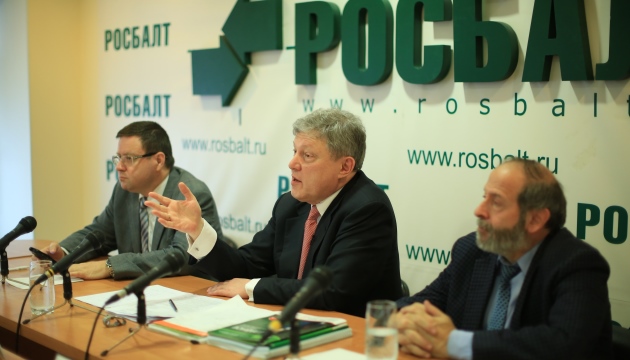 For five years YABLOKO deputies submitted to the Legislative Assembly 96 bills, 24 of them were adopted. In addition, YABLOKO MPs received about 4,000 applications from city residents.

YABLOKO MPs told journalists about the most urgent problems the faction dealt with in the five years.

Boris Vishnevsky spoke about the work on preservation of St.Petersburg historical heritage. “We managed to get protection for definite architectural landmarks …, saved them from destruction and illegal reconstruction,” Vishnevsky said. The second topic was urban planning: “No one engaged in the amending the General Plan of the city development and the law on green zones in public areas as actively as the YABLOKO faction,” he noted.

Alexander Kobrinsky spoke about protection of citizens’ rights. He stated that complaints of violation of residents’ housing rights prevailed among all applications. Complaints on inaction of the city government were also very numerous. “I got a complaint from citizen, whom police refused 15 times to initiate a theft case, despite the fact that each time the prosecutor’s office canceled these decisions of the police as unlawful,” Kobrinsky noted. Also YABLOKO actively defended animals’ rights and fought against doghunters, according to Kobrinsky some improvements were reached here as compared to 2012.

The prime concern of the YABLOKO faction was the city budget. Draft budget amendments developed by Grigory Yavlinsky envisaged greater transparency of the budget process and strengthening of fiscal discipline. In December 2015, the Legislative Assembly approved Yavlinsky’s bill in the first reading. However, the ruling party majority in the city parliament tried to delay the adoption of the bill, scheduling the second reading for the next convocation of the Legislative Assembly in autumn 2016. Despite this, Yavlinsky has been working in the ad hoc working group preparing the bill for the second reading.

Another field of work of YABLOKO MPs was long-term development of St. Petersburg. The Expert Group headed by Grigory Yavlinsky developed conceptual strategy “Greater St.Petersburg. The 21st Century”. The concept envisages joint development of the city and the Leningrad region without their “mechanical merger”. The document was presented to the Governor and the City Government.

The third area was development of the city heating system. “If no measures are adopted here, then the Minstry for Extraordinary Situations will have to take it up, rather than the Legislative Assembly. It will be a catastrophe [with heat provision],” Yavlinsky said. Together with experts, he developed a bill on capital repairs of housing and modernization of the heating system.

Nevertheless, serious reforms in the energy sector are impossible due to political reasons, Yavlinsky noted, “The Department of Energy protects only the interests of the largest businessmen related to each other by kinship ties. Interests of St.Petersburg have no meaning for them”.

Yavlinsky believes that “as long as such institutions as independent judiciary and independent press, transparency and accountability of government, free and independent businesses are established in the country, modern solutions are simply impossible.” “This is the meaning of our political stance,” he said.

A movement of Grigory Yavlinsky supporters was founded in St.Petersburg. Its activists engage in civic activities in St.Petersburg. They also run a large project on public control over the expenditures of the city budget.

Some of the federal level initiatives developed by Yavlinsky during his work as St.Petersburg MP together with the State Duma deputy Dmitry Gudkov have been already submitted to the State Duma of the Russian Federation.

Speaking about the upcoming elections to the State Duma, Yavlinsky told the press about the “Coalition of the Political Alternative” forming around YABLOKO. Thus, State Duma deputy Dmitry Gudkov and politician Vladimir Ryzhkov signed a coalition agreement with YABLOKO and will run from YABLOKO in the elections. Their nominations will be presented at the YABLOKO Congress in late June. The party list to the Russian parliament will include non-YABLOKO candidates, including candidates from trade unions.

“If the majority of Russians come to the forthcoming elections and vote, the situation will radically change. This would be like a miracle. But today a mass-scale propaganda is unleashed so that to reduce people’s interest in the elections. The price paid for this will be very high. While there is a possibility to change something, it should be used, ” Grigory Yavlinsky concluded.

MORE ARTICLES
17.04.2017 Other Russian regions should adopt the regional budget law built on the model of Grigory Yalvinsky’s budget law developed for St.Petersburg

This week, the Legislative Assembly of St. Petersburg adopted in…

On 22 March, the Legislative Assembly of St. Petersburg adopted…