The date 27 October 1962 has gone down in history as “Black Saturday”. It is believed that on this day the world was the closest it has ever come to a nuclear war. This was the height of the Cuban missile crisis.

Today, almost six decades later, the threat of the use of nuclear weapons is real again. Admittedly, the pandemic is playing havoc globally, the economy is on the wane, and there are elections in the United States. However, all these factors merely distract attention from the danger of war. Meanwhile, the nuclear threat has one specific feature: it can in an instant render all worries about any other issues irrelevant. 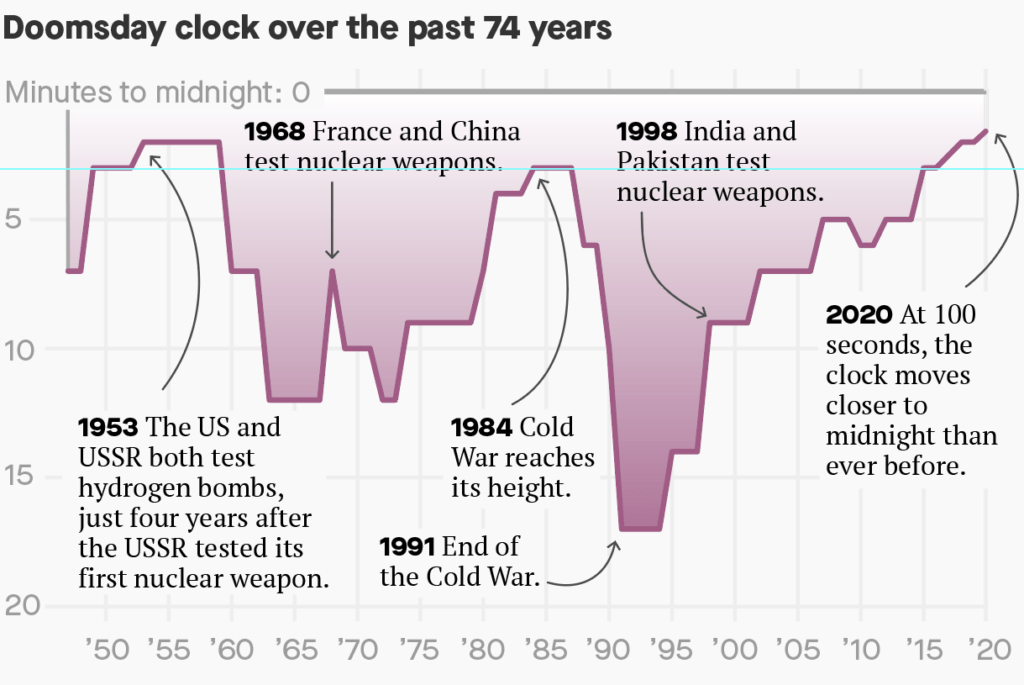 It is well known that President Putin, his generals and high-ranking officials have consistently discredited the INF Treaty during the past 13 years (Read more: The Threat of War, December 2019). The official attitude towards the INF Treaty was expressed most tellingly in the Foreign Policy Concept of the Russian Federation 2016, which did not even mention the treaty in the list of arms control treaties that Russia has undertaken to observe2The Concept of the Foreign Policy of the Russian Federation (approved by President of the Russian Federation Vladimir Putin on 30 November 2016), Section 27.. This is not surprising, as Vladimir Putin himself is in actual fact the main advocate for the repudiation of the INF Treaty. Speaking at a collegium of the Ministry of Defenсe in December 2018, Russia’s President declared that the conclusion of the INF Treaty in 1987 amounted for the USSR to “de facto unilateral disarmament”, and «God only knows»3Vladimir Putin based his assessment on information that at the time of the signing of the treaty, the United States had medium-range sea-launched and air-launched cruise missiles (SLCM and ALCM), while the USSR had only a ground launched cruise missiles which were prohibited by the treaty. In actual fact, however, the opposite was true: starting in 1983-1984, the Soviet Union had developed submarine-launched medium-range cruise missiles with a nuclear warhead S-10 Granat and air-launched cruise missiles Kh-55, while the land-based missiles (RK-55 Relief) had still not become operational and were stored in warehouse facilities (80 missiles in total) by the time of the signing of the INF Treaty. Meanwhile, the United States had by then already deployed 320 such missiles (BGM-109G) in Western Europe, which were then destroyed under the treaty. Although the USSR destroyed 1,846 missiles of various types, none of them could have reached the USA. Consequently, the treaty did not strengthen directly the security of the United States, and instead simply eliminated the nuclear threat for its NATO allies and American bases in Europe and Asia. For its part, the United States destroyed 846 medium-range nuclear missiles. Furthermore, all these missiles would have been able to strike with a short flight time or at low trajectories and devastate the entire European territory of the USSR, and equally destroy the secure underground command centres of the Soviet military-political leadership. That is why this treaty actually represented for the Soviet Union (and subsequently its legal successor Russia), the first agreement on extensive reductions in strategic offensive weapons by the United States (by almost 1,000 warheads and carriers). why the country’s leadership agreed to it.

However, when the deployment of NATO missiles, including nuclear missiles near Russia’s borders with the shortest flight times and on low trajectories, became a reality as a result of the repudiation of the treaty, and the danger for Russia was critical, Putin had to back off and deliver a comprehensive speech on the need for de-escalation in Europe. Now the lack of a strategic vision will have to be remedied quickly. Moreover, the specificity of the nuclear threat is such that regardless of previous statements, any new initiative leading to detente must be supported.

However, almost all the President’s entourage of politicians hailing from the security, military and law enforcement agencies are on a warlike footing: they have articulated on a regular basis that the country must withdraw from the INF Treaty on various pretexts since 2006, in particular after Putin’s speech in Munich in February 2007 4See Speech and Discussion at the Munich Conference on Security Policy, 10 February 2007, Munich.. All these factors created the necessary context for the liquidation of the INF Treaty.

And even though it goes without saying that the United States is to a large extent responsible for the destruction of the arms control system, it would be  entirely possible to preserve the INF Treaty if Russia displayed an interest,  backed by the persistent efforts of the regime and a minimum of political skill5In the past, similar solutions would also be found on even more delicate military-technical issues. The general rule of law on the presumption of innocence does not apply when it come to the control of nuclear weapons. A party that has been accused of violating the agreement, based on facts and figures, must prove the groundlessness of such claims, moreover with the submission of supporting factual evidence. Similarly, the United States cannot escape with verbal assurances, and is instead compelled to provide Russia with technical evidence that the missile defenсe launchers in Romania and Poland cannot be used to deploy Tomahawk cruise missiles, unlike warships equipped with Mark 41 vertical universal launching systems. If there is no such evidence, then the launchers should be technically modified or dismantled accordingly. At the very least, agreement should be reached on the possibility of regular Russian on-site inspections with short warning times to make sure that there are no cruise missiles at US ABM bases.. However, this will naturally necessitate a change in the rhetoric and an end to procrastination based on political positioning according to the principle “if you don’t want it, we don’t need it”6Figuratively speaking, the positions of the two powers on the huge problem of the INF Treaty and all the controls of nuclear weapons built on its basis were separated by only 53 centimetres — this is the difference in the length of the container missile launcher of old and new Russian cruise missiles. The United States attributes this fact to the larger fuel tank and longer range of the 9M729 missile than is permitted under the treaty (500 km), while Russia claims that this difference is due to the larger section of the warhead and control unit. The issue of these 53 centimetres on both sides was resolved without any ultimatums – by coordinating verification of the technical features of this system (the size of the fuel tank) without any disclosure of military secrets..

However, the regime is adhering to a different political line. Putin’s key thesis can be summed up as follows: Russia is surrounded by deadly enemies, and foreign policy is merely a continuation of a war (which has not actually ended), but involving the use of other means. That is why Russia has lacked and lacks the political will to maintain peace through disarmament and mutual trust, and is driven by only two goals: to arm the country tooth and nail and deploy propaganda to hold other people responsible7Neil MacFarquhar. Russia Shows Off New Cruise Missile and Says It Abides by Landmark Treaty, The New York Times, 23 January 2019.. In actual fact, this is otherwise known as preparation for war.

It is clear that as in the past Putin’s main argument when it comes to any talk about nuclear security remains statements on Russia’s ability to «break through» the US anti-ballistic missile defenсe system with hypersonic missiles, based on his conviction that at present nobody else disposes of comparable weapons. To all intents and purposes, this is exactly what the Russian President repeated several days ago when addressing members of the Valdai Club8See Valdai Discussion Club Meeting, 22 October 2020..

It is clear that when Russia talks about de-escalation, there are compelling reasons to distrust the sincerity of the intentions of Russia’s leadership. Over the past few decades we have become a country with a negative reputation9See Reputation lost: Poisoned by lies, September 2018.. Nobody trusts anything that we say or do: starting with the Olympics and ending with cases of poisoning. When it comes to disarmament, the general focus of domestic and foreign policies of “Putin’s system” evokes quite rightly particular distrust — a highly authoritarian police state and the oft-articulated mission of creating a “separate civilisation” to counter the West10Putin on the preservation of civilisation, “Moscow. Kremlin. Putin», 17 May 2020.. It is clear that any statement about de-escalation is to a large extent a PR stunt: “We are not the culprits, for we are advocating for peace”. It stands to reason that the statement was made ten days before the US presidential elections when the White House is unlikely to become preoccupied about any so-called de-escalation in Europe.

In actual fact, the views of Russia’s leadership about treaties and “treaty compliance” can be found in Putin’s recent statement: “Regarding the INF Treaty, the United States came up with an excuse and accused Russia of some violations, and then withdrew from the treaty. If this were the case, if everything had been exactly as our American partners presented it, they would also have gone ahead and started violating it too below the radar. Who has been stopping them?»11See Valdai Discussion Club Meeting, 22 October 2020.. As they say, any comments are pointless here.

Nevertheless, the issue of disarmament is so monumental — literally — that it is a very short-sighted, poor and narrow-minded policy to refuse to engage in any dialogue, without even starting it, citing distrust of the Russian regime. The advocates and proponents of confrontation both in Russia and in the West are counting on just such a reaction. For example, just the other day, an adviser to the US President announced Washington’s readiness to deploy American missiles in Europe to “deter Russia”12The United States poised to deploy missiles in Europe to deter Russia, RBC, 28 October 2020..

Therefore, fully cognisant of the fundamental values of the Russian regime, every effort should be made to use any Kremlin initiatives on disarmament. One can invent any forms of mutual control, including fundamentally new methods, but one must at the same time proceed from the premise that this concerns right now global security in the most direct and widest sense. It would be extremely irresponsible for all sides to allow the situation to intensify to the levels of confrontation level seen in October 1962. Back then there was a real danger of war, and no one could guarantee a peaceful outcome. And the current escalation of confrontation could end completely differently to what happened then. This must be remembered. And it would also be good to understand that the greatest geopolitical benefit is that we would manage to avert a catastrophe of universal proportions, and avoid “going to heaven” promised by President Putin13They will simply die»: Vladimir Putin explained what would happen to aggressors, RBC, 18 October 2018..

Putin is not developing a policy to prevent war — on the contrary, he is preparing for one.

The main aim of the government of any country is…