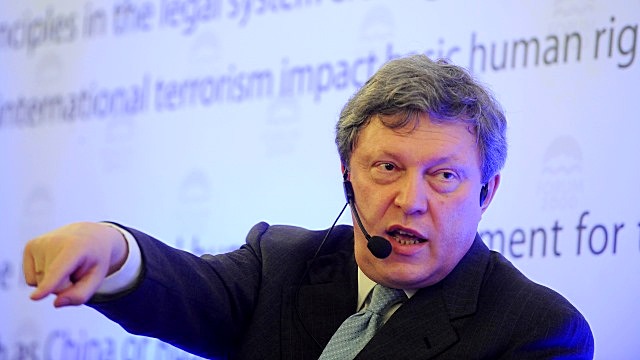 In recent weeks, the Russian State Duma has prepared a number of regulations that limit prescribed in the Constitution of the Russian human rights and freedoms. So, on April 22 in the third reading deputies approved a bill aimed at combating terrorism. The first of these, in particular, provides for the punishment not only for the organization, but also for the preparation of the riots.

Second — strengthens government control over the Internet. So, bloggers page which has more than three million users a day, will have to provide information about yourself Roskomnadzor, and their sites to be included in a special register. Such legislative activity coincided with the annexation of the Crimea and the tense situation in the south-eastern Ukraine.

In an interview with Deutsche Welle founder of the party «Yabloko», and now the leader of the «Apple» in the city Legislative Assembly of Saint Petersburg Grigory Yavlinsky said the consequences of Russia policy of self-isolation, what he thinks about the annexation of the Crimea and the idea of federalization of Ukraine.

What is the cause of further tightening of domestic policy of the Kremlin and the strengthening of its foreign expansion?

Grigory Yavlinsky, founder of the «Yabloko»: This corresponds to the course, followed by Russia in the third period, or, if you like, the fourth presidential term of Vladimir Putin. The meaning of this course is that it is — anti-European, focused on the creation of separate state living for some own rules, which do not correspond to any international law nor the fundamentals of European civilization produced after World War II. But most importantly, this course does not correspond to the Russian constitution.

This is — an attempt to create a political autarchy, that is the state, which itself satisfies your needs, it goes pretty, and no it is no longer needed. But the isolation of Russia from the modern world development will cost the country and the people are very expensive.

Does this course annexation of the Crimea?

Grigory Yavlinsky: Yes, of course! This annexation expresses the tendency of this «special» anti-European Russia. According to this trend, it is not necessary to develop the territory, which is, and it is necessary to capture new territories and spend it all a lot of money. Such is the logic of the 18th century. However, while capturing new territories with them took taxes. And here is the opposite — the money will be invested in the newly conquered territories. And I think that this is going to end soon. All this logic is aimed at building the so-called «third way». But the builders of the «third way» forget that it is in the «third world».

And eventually it will lead to the collapse of Russia. This does not happen in a day or a year. The most severe impact will be felt in five or six years. So now you need to think about what anti-European development of Russia contradicts all the modern realities. And the price paid for it will be hard.

Some experts argue that the Russian economy is on the brink of recession. In this context, can we assume that the escalation provoked by the Russian authorities in the south-east of Ukraine, is a maneuver designed to distract people from their own country impending economic crisis?

Grigory Yavlinsky: I think that this is nothing more than political science speculation. Because if Russia starts to fall seriously standard of living, people do not distract even offer Rogozin foothold on the moon. These are two unrelated processes. The Russian economy has a very big problem of an institutional nature. The Russian leadership does not see these problems, does not understand and does not want to deal with them.

As for the events associated with the Ukraine, the two-faced and ambiguous policy, which is now being implemented in Russia against the south-eastern regions of the neighboring country, is quite obvious. Since Russia is pursuing information policy aimed at creating more and more chaos in the south-east of Ukraine, and this policy is contrary to the interests and the inhabitants of these regions, and Ukraine as a whole, and ultimately contradicts the interests of Russia itself.

Russia insists on the federalization of Ukraine. If Kiev compromises, as it will affect the situation in the country?

Grigory Yavlinsky: It all depends on what is meant by this. Because, generally speaking, the federalization — a large economic rights, including with respect to taxes and royalties to the federal budget. That is, it’s all what does Russia for itself.

If Ukraine is the economic federation, then, in principle, from this can be good. And when it comes to the regions to veto any foreign and domestic policy decisions, it is not a federation, but something designed to further collapse of the country.

As for the groups of unidentified armed men, it is a question of law enforcement. Just do not have to create fighters for some «Donetsk Republic» or «Lugansk Empire»! It does not need anyone.

interview 01.09.2022 Gorbachev And The Many Directions He Proffered To The World

politics 26.07.2022 «Protests fail to affect politics not only in Russia, but also in the world»

Fierce critic of Putin and a former political opponent, Grigory Yavlinsky talks to Index about fear, lies and violence in today’s Russia