«Yabloko» party, the Alliance of Liberals and Democrats for Europe (ALDE), the Swedish People’s Party of Finland and the Swedish International Liberal Centre (SILC) held in Helsinki seminar on «The Future of Russian-European relations: liberal view.»

The seminar was attended by 250 people from Russia, Finland and other European countries — politicians, civil society activists, political scientists, experts, journalists, and students. The seminar also attended by representatives of Russian non-governmental organizations («The Voice», Moscow Helsinki Group) and the independent press («Novaya Gazeta»), under increasing pressure from the authoritarian government.

Founder and one of the leaders of the «Yabloko» Grigory Yavlinsky, delivered the keynote address «Russia in 10 years.» Chairman of the Human Rights «Yabloko», member of the Moscow Helsinki Group Valery soup and Secretary of the Political Committee of the Party Galina Mikhalev took part in panel discussions on human rights in Russia, trade and economic relations between Russia and the EU.

Grigory Yavlinsky stressed in his speech that only cooperation and integration between Russia and the EU will allow both sides to take its rightful place in the world of the XXI century and will enable them to compete with North American and Asian world economic centers in the near future. As leader of the «Apple», the main obstacles to European integration in Russia are «primitive authoritarianism», corruption and «deformation of the principle of freedom of conscience.» «Primitive authoritarianism does not give an opportunity to develop, does not allow the self to the next generation, limiting the space and respect for human freedom,» — said Yavlinsky. He also expressed confidence that the light of these changes in our country — overcoming Bolshevism and Stalinism, without which the European movement impossible. In this case, the main political issue in Russia Grigory Yavlinsky said forming meaningful alternative to the rate of the current regime, which «Yabloko» party considers its main task. Looking from this point of view, the position of the European Union and European Democrats, Yavlinsky stressed the importance for Europe deeper understanding «with whom it deals in Russia.» The leader of the «Yabloko» stressed the fallacy of the hopes of leftist populist and former officials, «dropped» from the range, and urged to pay more attention to developments in the Russian civil society.

Yavlinsky also defended the Russian civil society organizations, were persecuted in Russia, and expressed full support for the «apple» of such organizations as «The Voice», Moscow Helsinki Group, «Memorial». 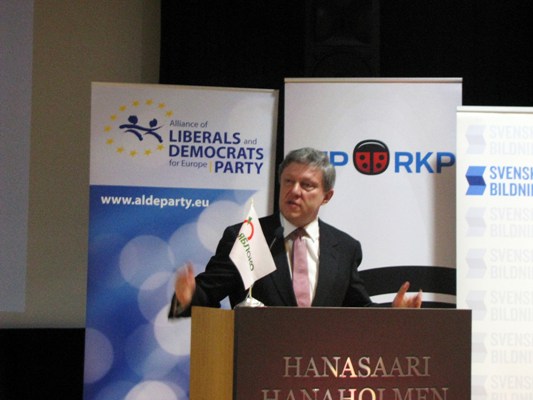 Valery Borschev — one of the key participants in the discussion on the theme «Human Rights and the new protective legislation: what should be the position of the EU,» said a civil investigation into the death of Sergei Magnitsky, which has attracted attention to the tragedy of Russia and the world community. B. Borschev stressed that the investigation was only possible due to the action of the law «On public control on human rights in places of detention,» the adoption of which the Party «Yabloko» and its faction in the State Duma sought since the late 90s. B. Borschev also expressed the need for the Russian and European politicians to adhere to the principles of the Helsinki Final Act in 1975 According to human rights activist, a departure from the principles enshrined in this document, the problem is not only Russia but also Europe-wide.

Lily Shibanov representing the organization «The Voice», informed the participants of the discussion about the persecution of non-governmental civic organizations with «the law on foreign agents.» Member of the editorial board of «Novaya Gazeta» Olga Bobrova emphasized that the discussion of repressive laws recently, very important, but should not reduce attention to the long-standing systemic problems, complicating the development of civil society and a free press, such as the dependence of regional Russian press from local authorities.

Galina Mikhalev, speaking during the discussion «Trade and economic relations: in which direction to develop integration?» Presented a detailed analysis of the development of Russian-European economic relations in the last decade and concluded that the need to return the policy to address specific issues of building relations between Russia and the EU based on shared values.

During the workshop, considerable attention was paid to the future abolition of the visa barrier between Russia and the EU. The conference participants emphasized that the use of the visa restrictions as an instrument of pressure on officials who violate human rights in Russia, does not contradict the strategic course to facilitate entry to the EU for a wide range of Russian citizens with the prospect of the complete abolition of visas.

Alexei Melnikov, economist, columnist and member of the Yabloko party…

07.10.2018 Congratulations to Yabloko Chair Emilia Slabunova on her anniversary

The 7th of October if birthday of Yabloko Chair Emilia…

The soviet dissidents movement had never been very popular. Therefore…

Vladimir Petrovich Lukin dedicated 25 years of his life to…