During his visit to Europe, Donald Trump continues his political trolling of Europeans. These are not just separate episodes. This is not even an individual political style. This is a conscious denial of the content of politics, its replacement with a show. And this is not politics in the style of a show, but a show instead of modern politics.

All that Trump says to Europeans, as a rule, does not make any sense. He threatens with the US withdrawal from NATO, if the partners do not double the costs, but no one believes that the US will quit from the alliance.

Trump pokes the Germans in the face of energy dependence on Russia and the supply of Putin’s regime with “pipeline dollars,” but nothing can change here: the German policy towards Russia in recent years has been very tough and is formed exclusively in Berlin, and it is not Trump who can move this policy to this or that side.

Trump criticises the plan for soft Brexit after this plan has already been adopted. Such criticism paves the way for the process of the “divorce” between the UK and the EU to come to a complete standstill. In addition, the American president talks about his preferences for the already former head of the British Foreign Ministry Boris Johnson and criticises Prime Minister Theresa May in a philistine manner.

All this shows that Trump does not act as a supporter or opponent of any policy, but as a person who simply entertains and feeds his ego. And the administration of the White House then cleans up the media space behind him saying that the president “treats everyone well”.

Trump generally speaks and acts not as the president of the United States, in whose hands there are (to put it mildly) some levers of influence on the situation, but as a provincial philistine who says that “all politicians, except me, are useless fools.” In the same philistine style in an interview with the British The Sun, he demonstratively crosses the boundaries of the political and diplomatic format and shamelessly comments on British domestic policy.

Trump stayed almost half his office. It is clear already that he has failed to seriously change the American domestic policy and to “cope” with the American system, and most likely he will have to reconcile with the system in order to qualify for re-election for a second term. Therefore, what is left for Trump is only to feed his ego with foreign-policy escapades, such as meetings with Kim Jong-un and Putin, and also trolling Europeans. 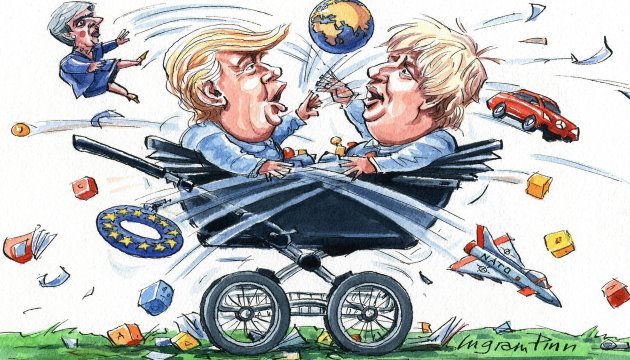 Picture: An illustration of how this whole story is seen by the influential The Financial Times: the “kids” Donald and Boris are being naughty.

In light of this, one can expect anything from the meeting between Donald Trump and Vladimir Putin but a positive and serious result (see the article “Helsinki 2018: The Lost Future”). Continuing his verbal escapades and trolling of his negotiating partners, Trump can provoke a further increase of tension, for example, in Syria or in relations with Ukraine.

What Trump said in his interview with The Sun:

“If they do a deal like that [on Brexit], we would be dealing with the European Union instead of dealing with the UK, so it will probably kill the deal,” Trump said in an interview with the conservative British newspaper The Sun.

According to Trump, Theresa May ignored his advice on how to negotiate an exit from the European Union. “I would have done it quite differently,” he said commenting on May’s plan. “I told Theresa May how to do Brexit but she didn’t listen to me.”

According to the US president, the so-called “soft Brexit”, for which May stands up, went in the opposite direction compared to his recommendations, which “is very depressing.”

In an exclusive interview with The Sun, Trump also noted that [former Foreign Secretary] Boris Johnson would make “a great Prime Minister”.  “I think he’s got what it takes,” the president said.

And now what the US administration has to do:

On war and peace, the future of Russia, as well as the role of the political party at a time of military actions which are precipitating the country’s collapse

Yabloko 01.09.2022 Gorbachev And The Many Directions He Proffered To The World