ARTICLES The Politics of the Emperors With No Clothes
19.07.2018 / World
#foreign policiy
Share 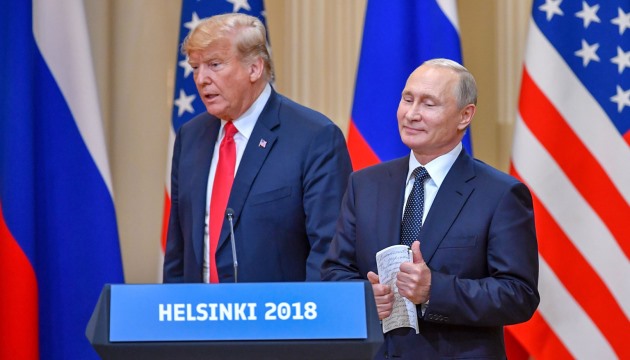 The next day, after the meeting with Vladimir Putin, Donald Trump arriving in Washington denied what he had said in Helsinki. It turns out that he was “misunderstood”, he simply had a slip of the tongue, “misspoke”, but in fact he, “let him speak from his heart” ([as] Vitaly Mutko [Vice Prime Minister, ex President of the Russian Football Union and ex Minister of Sports, said in his speech before FIFA in English with the heaviest Russian accent]), he wanted to say the opposite: he believed the American intelligence, which believed that Putin interfered into the [presidential] elections in the United States. Simply English is a complicated language, and the American president made a mistake with double negation, and “fake news” (“the deceitful American press”) distorted it even more.

And Vladimir Putin, returning to Moscow, also denied his words. Through the Public Prosecutor General’s Office (?!) he asked to consider his Helsinki statement on the withdrawal of USD 400 million by Bill Browder from Russia [and transferring it] directly to Hillary Clinton’s election campaign invalid. It turns out that it was about USD 400,000. The Russian President simply made a mistake … by a thousand times. And Putin’s speech was slightly “edited” in the Kremlin: the pronoun “we” was deleted in the published transcript in the sentence about the annexation of Crimea “we held a referendum in strict accordance with international law, with the charter of the United Nations”. A guilty mind is never at ease, as they say.

Not only that the meeting between the presidents of Russia and the United States was fruitless and meaningless, so the next day both refused their words. Politicians, observers and world mass media were discussing [their speeches] the whole day, making conclusions, giving assessments and quoting, and then the presidents came out and said: well, all right, that’s enough, we did not say so, but you misunderstood us. This caused a new wave of discussions and “analysis”. All this resembles the “effect of the emperor with no clothes”. Two emperors with no clothes.

Well, how can you rely on the words of Putin and Trump after all this? What to expect? What to think about the prospects and about security? Putin has already responded to Trump’s refusal of his words: on the morning of 19 July, Russian news agencies started pouring reports on the testing of the Burevestnik cruise missile, the Poseidon nuclear submarine, the Peresvet combat laser complex, and the plans for the transition to the creation of a strategic nuclear weapons complex with a missile equipped with a nuclear power plant…

Putin and Trump have failed and will not be able to reach any agreements, since the official positions of the sides on all the key issues for discussion (oil prices, Iran, Syria, Ukraine), as well as the objective interests of US and Russian administrations, radically diverge. The only thing that makes possible mutual understanding between the two presidents is their mutual distrust of the established international order, the principled rejection and misunderstanding of the modern world. If Trump and Putin continue their journey into the past (paraphrasing the American president, “to make the world great again”), they can themselves become victims of the “collapse of globalism.” The trade war unleashed by Trump will have many consequences, and in combination with his policy of breaking the world order and international structures, it can shake not only the world economy and lead it to a serious crisis, but also significantly destabilise the world military-political situation.

During the years of the Cold War, when a clash between capitalist and socialist systems threatened the whole world with nuclear war, any face-to-face meeting of the leaders of the United States and the USSR became an important political event itself. The meeting of the leaders of the “superpowers” representing the two systems was a certain guarantee of peace and detente. The summit held this week in Helsinki does not relieve any concerns about a possible direct military clash between Russia and the United States in Syria, or in the case of aggravation of the situation in Ukraine. The same prerequisites for escalation, which were there before Putin’s meeting with Trump, are maintained after it. In addition, the US president does not act as a leader of the Western world, expressing a consolidated position. The meeting with Kim Jong-un could still be perceived like this under some point of view, but Trump’s actions before the Helsinki summit created a completely different context: the American leader’s tour of Europe became a tour of a solo egoist (see my article “A Trump Show” http://eng.yabloko.ru/?p=19921). Needless to say, what kind of system Putin represented at this meeting. Modern Russia (as, incidentally, and personally in the case of Trump) has neither ideology, nor allies. There is only a stagnant economy and, consequently, less than 2 per cent of world GDP.

As a result, no agreements were reached in Helsinki between the parties, no decisions were made, no documents were signed, no formal joint declaration was even announced. A widely publicised meeting between the presidents of Russia and the US turned out to be nothing more than a PR-action for both the sides.

However, the parties did not interfere with each other PR. Trump did not even object to Putin when the latter suggested interrogating 12 Russians suspected of interfering in the American elections. In exchange, Putin asked for “very little”: to interrogate William Browder, the head of the Hermitage Capital Management fund in the United States. But Browder is not just an American, whom Russian law enforcement agencies have questions to. The “Browder case” means the “Magnitsky case”. This is one of the largest corruption schemes in Russia, where high-ranking officials were involved, and the Fund’s lawyer Sergei Magnitsky was killed in prison. The attitude of the American establishment and the United States in general to this case is quite definite. But Trump did not say anything, because Putin said that “Browder gave Clinton USD 400 million for the election campaign”. Trump’s personal hatred to Hillary Clinton is so great that he seems to agree to any illegal actions and to any interference of anyone into anything so that to annoy his former rival. This US president, if he does not want to, may not represent the position of the American state. Trump’s personal complexes determine the position of the president.

In general, if there was something a little bit interesting and lively in Helsinki, these were the answers to questions about Russia’s interference in the elections in the US. It was funny to see the US president justifying himself and the Russian president calling to the American justice – and this is perhaps the best illustration for a meaningless meeting. Putin appeals to the US court as the only authority that inspires confidence in the case of interference in the elections! We are, certainly, well aware that Russian oligarchs, not trusting the domestic judicial system, prefer to sort things out in the High Court of London. But the Russian president appealing to the American court is, certainly, something new.

The World Cup ended, the “historic” summit in Helsinki ended, Trump flew home to fight the Democrats, the American press, the Special Counsel Mueller and the shadow Hillary Clinton. Putin, too, returns to his, Russian workdays. These workdays did not change at all after the meeting with Trump: there are sanctions, confrontation with the West in general and the United States in particular, the arms race in full swing – everything is in force, everything is as it was, nothing will change.

The Helsinki summit did not yield any results, but the bad taste from the meeting lingered: those who today call themselves the “world leaders” are hardly such. They even do not always represent their own states, representing, rather, a threat for the world. Today the emperors with no clothes are such.