ARTICLES “Someone must honestly say what he thinks”
22.09.2022 / Russia
#interview
Share

Here we publish Grigory Yavlinsky’s commentaries on how Russia came to 24 February, 2022, why the special operation was inevitable and what role the international community played in this. Based on unpublished interviews given by the leader of the Yabloko party to Russian and foreign journalists in the recent months. 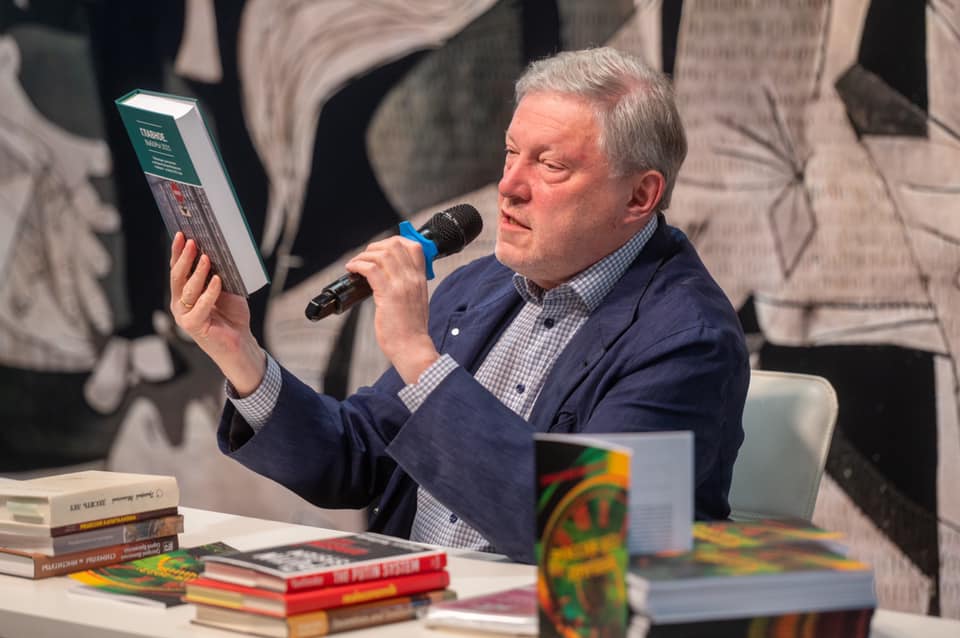 Grigory Yavlinsky at the launch of his book “Russia-2022: Underlying Causes. Why and how did a political system appear which has resulted in the events on 24 February, 2022”, 10 September, 2022. Photo by the Yabloko Press Service

— Democracy, virtually, did not emerge in Russia. There were literally several years when, in the late 1980s and early 1990s, they tried to do something in this direction, but real democracy did not appear in our country.

It is important to understand that what is happening now is the product of the system created in Russia after 1991. In this system, there was a merger of power and business, power and property. This is called the “oligarchic corporate system”. This was done through criminal loans-for-shares auctions, as well as through other, smaller forms of privatisation. As a result, there was created a system categorically denying independent judiciary, independent press, an independent parliament, independent public organisations and a regular change of power. Therefore, such a system selects a leader who will maintain it as long as possible. It was such system that was built during the reforms of the 1990s.

— Yes, but in the late 1980s, thanks to Gorbachev’s perestroika, Russia seemed to have entered the path of democratic change. How did such a sharp reversal come about?

— This happened because President Yeltsin decided to implement the “Washington Consensus” plan in Russia, which was not suitable for reforms in the former Soviet Union. As a result of this erroneous choice, inflation was 2,600% already in 1992, which means that all people were simply robbed – absolutely all savings were confiscated within a year. How, under these conditions, when people had no money left at all, could privatisation be carried out? Only by criminal means. That is how the government operated. That is how the foundation of the oligarchic corporate semi-criminal system was laid. Everything that you see today is the result of the creation of such a system.

And further, in the early 2000s, oil and gas prices rose, and economic hallucinations arose in the Kremlin that something else could be built in such a system. However, in reality, it is impossible to create anything positive in the oligarchic system, and the combination of the oligarchy with natural resources closes the issue of serious breakthroughs in the development and implementation of the country’s own new technologies, improvement in the organisation and functioning of the state, and modern development in general.

— Returning to the special operation, do you think that taking into account all the prerequisites, it was inevitable?

— Yes, it was decided a long time ago. This was discussed at a conference in Munich in 2007. In fact, everything was already announced and done in this direction in 2014 – then there were already [the developments in] Crimea and Donbass.

In 2021, Putin wrote an article where he was absolutely unambiguous about his intentions. In addition, there was already Chechnya, there was Georgia, and there was Syria. Only the blind could not see what was happening.

—  In the late 1980s, both Russia and the whole world had completely different prospects. The Soviet Union became more open, the Cold War ended, and the fear of a full-scale war was gone. But three decades later, we still came to a real large-scale armed conflict in the centre of Europe, and the threat of an even greater escalation. Can we say that the changes in relations between Russia and the world thirty years ago were in vain?

— No, they were not in vain, but, unfortunately, they did not receive a vitally important consolidation or continuation. Neither the idea of ​​a “Greater Europe”, nor the idea of ​​building a new international political configuration, nor the economic advantages of globalisation (the new opportunities and resources of which had to be used to support poor countries), nor the idea of ​​creating a new format of the European Union, which would include Ukraine, Russia, Belarus, and Moldova – none of this was implemented. Although it was the changes of the late 1980s, the end of the Cold War and the liberation of Russia and the whole world from an absolutely destructive confrontation that provided all the opportunities for moving in this direction.

In the same way, by the way, there was no new NATO configuration that could answer the question of what Russia’s place in the system of international strategic security was. Putin, on the other hand, proposed joint missile defense – but the West did not react at all. Putin once even spoke about the possibility of interaction between Russia and NATO – and there was no reaction to this. Putin has repeatedly voiced the concept of “Greater Europe” from Lisbon to Vladivostok. Has anyone taken a step forward?

— But why, in your opinion, all this was not implemented? Such beautiful, understandable, humane ideas. Why didn’t this happen? The world was not ready? What was the reason?

— [The reason lies] in the low quality of world politics and, most importantly, the low quality of world politicians. It was necessary to deal with these issues, rather than arrange a senseless war in Iraq. It was necessary to do this, rather than spend billions of dollars in vain so that to escape from Afghanistan later. That’s it. What else is there to add?

— If you allow, I will return to the special operation against Ukraine, which has been going on for more than six months. When can it end? How and where can it end?

— Now there will be no end to it. Look, India and Pakistan have been dividing Kashmir since 1947. Israelis and Palestinians have also been in conflict for 75 years. Cyprus has been divided in two parts since 1960. Well, at the moment, thank God, they are not fighting in Cyprus. But there is no end in sight to all these territorial confrontations. Just recollect acute conflicts over territories, up to bloody wars between France and Germany that lasted more than 150 years, until the European Union appeared.

— It turns out that what is happening in Ukraine is impossible to finish?

— Not yet. But it should not have been started! However, a tragedy happened, and now it is for a long time. There will probably be stops, breaks… Look, in 1997, at the end of the First Chechen War, then head of Chechnya] Maskhadov flies to Moscow and signs an agreement with Yeltsin. But two years later, a new war begins… So there may be breaks, but the prospects are very bad.

— Does Russia have resources for a long-term confrontation? Almost the whole world are on the side of Ukraine today and render it corresponding support, but where will Russia get the resources?

— Russia has unlimited resources in the long run. There is a very common and tragic expression here “we will pay any price for it”. And that’s it.

— Your Yabloko party participated in the municipal elections this Fall in the absence of democratic institutions, against the background of the ongoing special operation and repressions. Why are you doing this and what do you expect?

— Today we need to talk to people, explain what happened to the country, show where we are going. During an election campaign, our candidates have the opportunity to go from house to house and tell that there is such a stance that now is not the time to cultivate flower beds, build bike paths and install benches. This must be done, but this is not the main thing now.

And if they support such a stance, [we must] convince them to vote for this stance. This is what our work is today, this is politics.

— But now it is extremely dangerous to voice such a stance in Russia. The authorities initiate criminal cases, people receive real prison terms for anti-war statements. Do Yabloko candidates running their campaigns under such conditions understand these risks?

— Yes, everyone understands everything perfectly. But someone has to do it. Someone must honestly speak about what he thinks. Someone has to tell the truth.