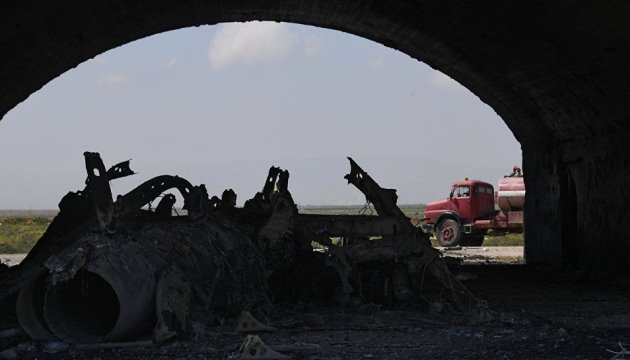 How can it be still unclear to someone that Syria is a trap for Russia? Russia was led into the Syrian trap by the stupidity of Russian foreign policy, its short-sightedness and adventurousness. Any further steps targeted at escalation of Russia’s military actions in Syria only aggravate our situation. The suspension of the memorandum envisaging the mechanisms to avoid incidents between the United States and Russia in Syria means that any stupidity or accident can now lead to a direct clash.

Contrary to common sense, Russia has been struggling to protect Bashar al-Assad. Putin sympathizes with the Assad regime, and our country, having started the war on his side and sending its military to Syria, has become a hostage to this regime. A big political stake was put on the Syrian president and preservation of his power. However, in reality, Russia does not control Assad, either politically or militarily. And it is not Russia which determines the strategy and tactics of military operations and political maneuvers in Syria (in particular, in the inter-Syrian negotiations).

It is also impossible to rely on Assad. Moreover, the Syrian president does not fully control the situation even in the territories under his control, not to mention the zones of military operations. Nevertheless, the Russian leadership has turned Assad into a symbol of its foreign policy and now can not give up [supporting] him, even when his crimes drag Russia behind him into a shameful pit. It turned out that Russia fails to effectively protect Assad from Americans either. It has become obvious after yesterday’s destruction by the Americans of the base of the Syrian air force. The US attack showed that, if necessary, they would do whatever they want.

The Russian partnership with Turkey is not merely fragile. It is a part of the trap. Moreover, Russia’s policy has also led to dependence on the decisions of the extremely inconsistent and unstable Turkish regime. All the plans for a joint action, all the «bridges» with the regime of Recep Tayyip Erdogan collapse, as we can see, in an instant and unilaterally. Turkey actively supports the US and opposes Assad and Russia in the present Syrian crisis,.

Iran has been naturally pursuing its own interests and has also achieved its goal: it firmly tied Russia to itself, quarreled Russia with other interested parties and made Russia its tool. By the way, it can not be completely ruled out that it was Iran that somehow provoked the use of chemical weapons in Khan Sheikhun.

Israel, which traditionally strives for good relations with Russia, has sharply condemned the use of chemical weapons, showing no doubt who did it, and supported the American strike against Syria. This was to be expected. Israel is very concerned that new weapons have got into Hezbollah’s hands and that Shiite militants have had good training under the guidance of Russian instructors. In addition, after the Israeli air raids on Syrian targets and summoning of the Israeli Ambassador to the Russian Foreign Ministry, it became clear that a crisis had emerged in the relations between the two countries. But it is much more difficult for the Russian aviation to operate in the region without the neutrality of Israel.

Jordan and Saudi Arabia have certainly also supported the actions of the United States.

So Russia does not have allies in the region.

In such a situation under the present «chemical» crisis, Russian politicians and diplomats have, as usually, continued to confront the whole world, stubbornly defending the military dictatorial regime of the Syrian president. Delaying the UN investigation into the bombing with the possible use of chemical weapons in Khan Sheikhun, Russia has virtually proposed to play the fool — proceed, so to speak, from the presumption of uncertainty, as if saying “something happened, let’s start from a clean sheet finding out what happened and who was to blame”.

And then the US missile strike followed. Donald Trump in response to the chemical attack and without much thought, made a strike at Assad’s troops, however, technically warning (literally the day before) China, Israel, Turkey and Russia. The Americans justify the blow by the fact that, given the position Russia has taken at the UN, there was nothing left for them to do.

The Trump whom so many Russian political commentators were waiting for – the one who would not think twice, resolutely correct the consequences of Obama’s «indecisiveness» and turn on a dime the previous US policies – showed his worth in the missile attack on Syria. However, the first and so far the only decisive reversal [of policies] not in words but in deed, hurt the interests of the very one who seemed to have been supporting him.

Furthermore, Syria presents for the United States only one of the elements of their Middle East policy, which, in turn, is only a part, and not a key part, of their global policy. The decision to strike with Tomahawks on the Syrian air force base, which overshadowed all other world events, was in fact taken «on the sidelines» of Xi Jinping’s visit to Donald Trump. We can assume that one of the motives that guided the US president was the desire to demonstrate his “toughness” to the Chinese leader.

The vanity of hopes that Trump would pull Russia out of its international isolation and sanctions was clear from the very beginning. But an American blow at the government airbase in Syria is the end of the “Trump-Is-Ours” game. At the same time, it is clear that heating up of the conflict up to a «hot» war with the US is absolutely unacceptable for our country.

AND ALL THIS IS DONE FOR OUR MONEY

Protection of the Bashar al-Assad regime did not result in any foreign policy dividends for Russia. On the contrary, he and his crimes only more discredit Russia in the international arena. According to the UN, 300,000 people were killed (according to observers, 465,000 people), 2 million were injured and millions left the country during the war in Syria. Over 4.5 million people live in constant mortal danger.

Has Russia defeated the Islamic State? Experts, even those from the Russian «hawks», admit that Russia has not seriously engaged in the defeat of the ISIS, and the United States play a decisive role in the fight against terrorists. However, Russian media criticize more the actions of the anti-ISlS coalition than condemn the ISIS. The report of the Ministry of Foreign Affairs on this topic (about 204 killed warlords and liquidation of 35,000 militants) causes perplexity and questions, rather than indicate some achievements.

The resentment of Russia by Sunnis, the followers of the main and most numerous trend in Islam which Russia helps Assad to fight against, was further strengthened after Russia’s actual blanching over of the recent chemical attack. Moreover that Russia, having been a guarantor of the non-use and liquidation of chemical weapons in Syria since 2013, is responsible for the use of prohibited weapons by Assad. The number of Sunnis in the world is over 1.5 billion people, about 90 per cent of all Muslims.

Participation in the internal confrontation of Sunnis and Shiites is a direct threat to the security of Russian citizens. Therefore, one can not justify interference into the Syrian war by the need to ensure the safety of Russians. The effect is the opposite. The attack in St. Petersburg on the day of Vladimir Putin’s presence there is a message of this kind.

And that is all for our money, so to say. According to the most conservative estimates, Russia spent at least 87 billion rubles to protect Assad during the 18 months of the war. This is approximately the same amount as was allocated to the housing and utilities sector from the federal budget in 2016. This  money could suffice to build 400 kindergartens for 200 children each, or pay for a course of treatment to 320,000 cancer patients, or cover five years of study in Moscow universities for 60,400 children, or build 120 fitness centers.

Further [Russia’s] participation in the war in Syria and a growing expenditure of [Russia’s] domestic resources is a fundamental undermining of our vital forces. What is Russia doing there? What do we need there and what can we offer? Absolutely nothing, as shown by the developments.

Russia has got into this quagmire of an endless Middle Eastern religious war, and now our enemies only need only one thing: so that we are completely bogged down there, continuing to spend all possible and impossible resources. That is a trap.

WHAT SHOULD BE DONE?

There is only one solution: to stop Russian military intervention in the Syrian civil war and withdraw immediately. However, given the psychology of the present authorities in the Kremlin and the history of Russia’s presence in Syria, it is especially difficult to do this now. The assault of Americans on Assad is perceived as a challenge.

Nevertheless, Russia’s national interests should be higher. Russia has to act right now. Because tomorrow the conditions for a withdrawal from the Syrian trap can become even worse, and it is still necessary to get out of there. Yet Russia does not sacrifice anything, except its ambitions withdrawing from Syria. Further participation in the Syrian war on the side of brutal dictator Bashar al-Assad, who probably does not disdain of chemical weapons, as well as adventurism with bloody consequences in Ukraine, is morally unacceptable and represents an absolute political dead-end.

In addition, it is necessary to state with all certainty that neither the country’s economy nor its military resources allow to pursue a policy that includes:

— the war in Ukraine;

— an accelerated arms race (and at the same time the prospects of a military clash with the US at any moment).

The country can not withstand such a garrote even in the medium-term. Russia must stop all these military adventures, because its internal resources do not correspond to the foreign policy and personal ambitions of its leadership.

Otherwise, we will remain trapped, find ourselves in a deadlock from where it will be increasingly difficult to get out. After all, there are real forces interested in Russia getting bogged down in this conflict even deeper, getting exhausted in the absence of the necessary internal resources. And then the trap will slam shut. It was like this when the USSR was dragged into Afghanistan. Then the Americans took revenge for their defeat in Vietnam. Soon after Afghanistan, the country collapsed. History is merciless, it does not tolerate losers.

We need a powerful political will and at least a simple common sense, if not wisdom so that to admit mistakes and stop Russian participation in wars and adventures that we can not afford in any way. There are no alternatives to this.