ARTICLES «Protests fail to affect politics not only in Russia, but also in the world»
26.07.2022 / World
#interview
Share

On 16 July, the influential Italian newspaper Corriere Della Sera published an interview with Grigory Yavlinsky on the situation in connection with the Russian special military operation in Ukraine. Unfortunately, there are fragments in the Corriere Della Sera publication that do not correspond to the original Russian text. Here is the English translation of the Russian text of the interview, which was sent to the newspaper.

— At the beginning of the conflict many foreign special correspondents came to Moscow to report on anti-war protests. However, there were few manifestations, the number of their participants was small, and even then they were immediately suppressed. Why did this happen, what did it depend on?

— First of all, I would like to say that a political tragedy and a human catastrophe happened in February this year.

Returning to your question. First, it is the fear caused by very tough repression and pressure on people. Already on the eve of 24 February, the police began visiting the apartments of activists and intimidate them. Subsequent anti-war actions were harshly suppressed.

The second thing is propaganda — extremely powerful and without boundaries, — which includes lies, intimidation and blackmail. In Russia, all television is state-owned, there are no opposition newspapers and radio stations any longer. The only thing that still can be used somehow is the Internet. However, a lot is blocked there.

Third. In 2021, the activist movement in Russia was crushed. Only in January-February last year, over 11,000 people were detained at protest rallies, and 9,000 out of them were sentenced to fines and arrests. Dozens of people received several years of imprisonment on criminal charges. But these protests gave no results.

However, this is not only the Russian case. For example, in February 2003, about 2 million people took to street protest actions against the war in Iraq in the UK – it was the largest demonstration in the history of the country. Did anything change? No, Tony Blair joined the US military operation. All this happened in a country where the rule of law and democracy had existed for hundreds of years.

Russians feel and realise that today people cannot influence anything not only in Russia, but also in the world. 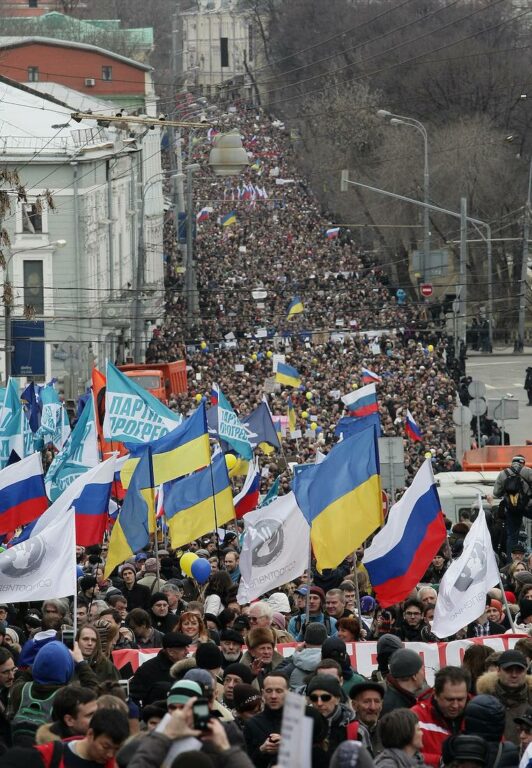 I don’t want to say that protests are not needed. They are a manifestation of human dignity. They did take place and are taking place even now. In 2014, hundreds of thousands of people in Moscow took to the streets against the military conflict with Ukraine. Nevertheless this didn’t lead to anything.

— It is called “Putin’s war”, and yet polls show that the majority of Russians support the military operation. Why do so many people look favourably on the war?

— Polls in the conditions of a police state and a military operation speak only of fear and nothing else. Yet, even according to state sociological services, about 20% of the Russian population does not support the special operation. This is, by the way, 20 million people.

But this system imposed learned helplessness on people. They have been convinced for 25 years that they do not influence anything. Due to high oil prices, people were taught to get kind of accustomed to the following: we would raise your living standards in exchange for your non-interference in anything.

— Putin has his own, very personal perception and interpretation of Russian history. How do Russians treat their history? Do they really know it?

— Indeed, I think people in my country know their history very poorly. That is how the circumstances came about. First, the Soviet authorities had been distorting history for 70 years, then, in the 1990s, there was a short break, but the new Russian state refused to evaluate the coup d’état of 1917, Stalinism and the entire Soviet period. But when Vladimir Putin came into power, they began adapting history to the new modern chauvinistic imperial image. The postmodern Restoration began.

— Is it really impossible to engage in opposition activities in Russia?

— They began elimination of the democratic opposition at the very end of the 1990s, so that to build autocracy in the country. Now there is no independent press, it is impossible to hold political actions, and there are no elections looking like normal ones. We are balancing on the verge between political opposition and dissidence. Nevertheless, we need to find ways and means how to work. We will not give up on our views and our goals. We will continue to tell people what we think. To do this we will try to participate in what is left of the elections. We will explain to people what is happening and why, and we will promote the programme of peace.

— A demokratura, a managed democracy, a dictatorship… How would you define today’s Russia?

— If we use the classic definitions, then this is a tough autocratic authoritarian regime. Given the digital technologies context, this is a particularly dangerous regime. In Russia, there is the possibility of the authorities’ total control over the population. So far, it has been still selective and targeted at the groups posing a danger to the authorities.

The main question is how such a regime appeared and why. My recent large work «Russia-2022. Underlying Causes» attempts to give answers to these questions.

— International publications keep talking about intricacies and conspiracies around the Kremlin. How are things in reality? Is there a possibility that Vladimir Putin will lose power?

— I am not inside, so I do not know what has been going on there. But I think that there is no conspiracy that could lead to a coup. Those who write about it indulge in wishful thinking.

— Will the impoverishment of Russian society and its middle class, caused, among other things, by sanctions, have consequences (and what exactly) in the medium term?

— Indeed, the process of impoverishment is underway, and it will become very sensitive by the end of the year. People will be annoyed, and in response, the authorities will point out to the enemies that have led to impoverishment. This, of course, will be the West. However, there will also be an internal enemy — those who do not agree with Putin’s policy, the “fifth column”. The indignation of the people will be led by the authorities, those who arranged all this.

Most likely, extreme left National Socialism will emerge, and it will be accompanied by large-scale repression and the defeat of all that part of society that does not agree with the current policies.

—  You said in a recent interview that Russia wants to build a separate civilisation with Ukraine, which will become part of it…

— I think that now Russia is trying to absorb Ukraine and make it live the way Russia lives today. But Ukraine wants to be a European country. This is an irresolvable contradiction.

— Did the West disregard Putin’s signals about Ukraine?

— In the past 30 years, the West has not developed a serious strategy towards Russia and the former Soviet republics, especially those in the European part. There was no talk about reforming Western institutions in such a way so as to integrate Russia into them.

The West disregarded all the signals coming from Putin: the Munich speech in 2007, the events in Georgia in 2008, and Syria. It reacted sluggishly to the events of 2014 in Ukraine. On 12 July, 2021, Putin wrote a long article that was merely a declaration of war [to Ukraine]. However, in the West, they read Putin’s article only at the end of November, when American intelligence began talking about the buildup of the Russian troops on the border with Ukraine.

—  In 2018, you presented your plan for resolving the conflict in Ukraine. How did you see the solution to the issue then?

— At that time, I thought that a way out of the situation was a referendum on Crimea under international auspices, international guardianship over Donbass, introduction of a peacekeeping contingent there, demilitarisation of the region and then transfer of these territories to Ukraine. Now we need already a different plan.

— Is the future of Russia European or Asian? What is the fate of Russia? What will it be?

— The answer to this question is simple: either Russia will become a full-fledged European country within the next 30 — 40 years, or it will cease to exist as an independent modern state.

Now we can talk about this only in one context: it is necessary to stop the tragedy in Ukraine. It is vital to reach ceasefire, conduct an exchange of war prisoners all for all and exchange of the bodies of the dead and then start the negotiations.