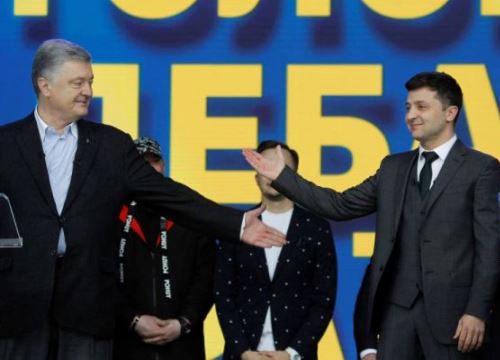 Inauguration of the new President of Ukraine is taking place in Kiev. Congratulations to Vladimir Zelensky and wishes of success to him. Endlessly difficult and dangerous work is in store for him.

Why did actor Zelensky defeat patriot Poroshenko? They say that because 73 per cent of Ukrainians do not understand the values ​​of their national state and do not have respect for themselves. They say that they do not need the Ukrainian language, the autocephalous church, the army and the turn of Ukraine towards the West, and they are tired of annoying anti-Russian rhetoric.

In fact, the main lesson of voting in the presidential elections in Ukraine is completely different: the idea of ​​patriotism, construction of a modern national state and protection of its interests cannot be realised through corruption, lies, provocations, speculations on nationalism, incitement of hatred and contempt for people. Poroshenko’s defeat is not a denial of his efforts, successes, and a policies vector. This represented voters’ statement that they considered important not only what has been being done, but also how it had been being done. The end does not justify the means.

Political goals in the eyes of Ukrainian voters are significantly inferior to human values: honesty, truth, humanism and justice. This is what people first of all want to see at the foundation of their national state. Poroshenko lacked all this.

This was also what the entire political class of Ukraine and the entire system lacked. As a result, in free elections, people chose the one who, in their opinion, had clean hands: “let him build Ukrainian statehood with these clean hands”.

Clean hands of the President are, virtually, part of statehood. Especially if we are talking about a European state, how Ukrainians see it today.

Whether the new President will cope with the post-Soviet oligarchic system of Ukraine or not, we will see in a couple of years or even earlier. In the meantime, no one knows it, and even he himself. But we should not forget why Zelensky defeated Poroshenko. The end does not justify the means.

On the prospects for Trumpism and the threat of fascism

foreign policy 07.09.2020 «The poisoning of Alexei Navalny should be investigated by an international investigation team»