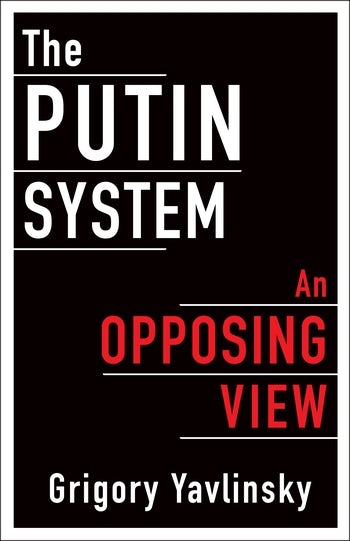 How power works in present-day Russia, how Vladimir Putin came to power and maintains his rule for over 20 years — these questions are often misunderstood and the answers remain opaque. In The Putin System, Russian economist and opposition leader Grigory Yavlinsky explains his country’s politics from a unique perspective, voicing a Russian liberal critique of the post-Soviet system that is vital for the West to hear.

Combining the firsthand experience of a practicing politician with academic expertise, Yavlinsky gives unparalleled insights into the sources of Putin’s power and what might be next. He argues that Russia’s dysfunction is neither the outcome of one man’s iron-fisted rule nor a deviation from the supposedly natural development of Western-style political institutions. Instead, Russia’s peripheral position in the global economy has fundamentally shaped the regime’s domestic and foreign policy, nourishing authoritarianism while undermining its opponents. The quasi-market reforms of the 1990s, the bureaucracy’s self-perpetuating grip on power, and the Russian elite’s frustration with its secondary status have all combined to enable personalized authoritarian rule and corruption. Ultimately, Putin is as much a product of the system as its creator. In a time of sensationalism and fear, The Putin System is essential reading for anyone seeking to understand how power is wielded in Russia.

“The Putin System shows how far from the path to a market- based democracy the country  has  deviated.  It  provides  one of the most penetrating, if bleak, analyses of the Russian sys- tem of recent years. Those seeking to understand today’s Russia have much to gain from the English translation.”

“Too insightful not to take notice.”

—The Globe and Mail

“A much-needed insider view from an important political fig- ure and reform economist.”

“Grigory Yavlinsky’s book is  of  great  importance.  He  gives us a clear-eyed diagnosis of Putinism, a phenomenon that exacerbates the crisis in democracy and casts a shadow over the world order in the twenty-first century. He also reminds  us that Russia has brave, determined reformers who have on their side logic, principles, and lessons from the past and present that will guide their remedies for the future.”

“Grigory Yavlinsky is one of the  most  acute,  brilliant  observ- ers of and actors in contemporary Russian life, politics, and history. The Putin System makes a uniquely valuable contribu- tion to understanding the Putin phenomenon in all its visible and  invisible aspects—and why  the  West  must  pay attention.”