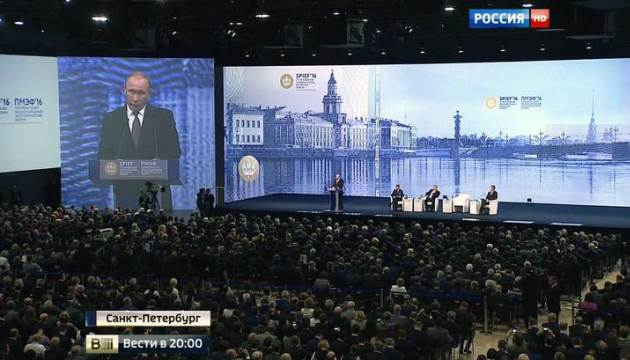 The Forum in St. Petersburg demonstrated several things. This forum was not about investment or even the economy…

All were speaking about the economy, but told nothing new – neither [Finance Minister] Anton Siluanov nor [Chair of Central Bank] Elvira Nabiullina, nor [Deputy Chair of the Economic Council under the President of Russia] Alexei Kudrin. Vladimir Putin’s report, as before, touched upon about many important things, however, the President did not formulate convincing definite solutions for improvement of hideous business climate and reduction of state intervention into business. A quote: “The domestic legal community have accomplished much for improvement of the quality of justice in the recent years. A merger of unification of the Supreme and Supreme Arbitration Courts played a positive role in ensuring the single standards of the administration of the law.” That’s it, it is impossible to say better.

The key decisions will from now on be adopted by the newly established Council for Strategic Development on the basis of a “project approach” and controlled by Vladimir Putin and Dmitry Medvedev. They will increase labour efficiency, improve business climate, facilitate the development of small and medium-sized businesses, support exports… Why then do we need the Government, the Economic Council, the Centre for Strategic Research, the Agency of Strategic Initiatives, etc. – it is unclear.

The economy is in bad condition: for the past two years direct investment dropped from USD 70 billion to USD 5 billion, and the prospects are vague. However, no one at the Forum added any clarity about what was necessary to do, or at least that they would do.

The “Greater Eurasia” project, which, apparently, had to become the central point – was not something new and extremely amorphous, so that to speak of it as of something really serious.

Something else is real: the turnover of the Eurasian Economic Union (EAEU) with third countries fell by 34 per cent in 2015. Mutual trade within the Union fell by 25 per cent in terms of US dollars.

When finished with the formal report, answering questions and engaging in a discussion, Putin made it clear: no changes in Russia’s external or internal policies were expected, a confrontation with the US would intensify (especially in terms of missile defense), the main emphasis in the economy would remain the same – pipelines and raw materials. Even football fans would be beating everyone who should be beaten, as always.

High rank foreigners – Nicolas Sarkozy, Jean-Claude Juncker, Prime Minister of Italy Matteo Renzi – came so that to take this opportunity and say directly, not through the media, to all the Russian elite who gathered together [at the Forum]: ‘do not expect anything other than what you have now, and do not hope’. Polite conversations, lunches, dinners, panel discussions – whatever of the kind. But there will be no exceptions and deviations from the policy of isolation and sanctions.

Developed countries are ready to deal with Russia: trade, invest, carry out joint projects, cooperate on security issues, terrorism and so on. But to do that, Russia should become clear and predictable, return to respect for international law and treaties: to fully implement the Minsk Accords, leave the Donbass, stop the aggression against Ukraine, begin solving the problem of the unlawful annexation of Crimea… That is to return to a policy corresponding to a modern country and stop responding to all the challenges in the style of “you are the fool”. Disputes and skirmish of the Russian side with the foreign guests were inconclusive and showed profound lack of understanding of the world politics in the 21st century.

Many in the Forum understood the key thing, but none spoke up the truth: the present policies were destroying the economy, the Russian economy would have no prospects at the current political course.