On 19 February, presidential candidate Grigory Yavlinsky visited the Krasnoyarsk Territory. The first half of the day he spent in the city of Zheleznogorsk, where he met with the team of city electric networks company and the head of the city administration. Then Yavlinsky went to Krasnoyarsk to address the university students, answer local media questions and hold a large meeting with the residents of Krasnoyarsk.

Prior to the meeting with the presidential candidate, the employees of the electric networks company in Zheleznogorsk had discussed and accepted their voters’ order expressing concern about the fate of the power grid complex of the city, and also asked Grigory Yavlinsky if he won the elections to amend the law so that the norms of the law on the contract system did not apply to closed administrative territorial formations.

Grigory Yavlinsky said that it was not his first visit to Zheleznogorsk, a city which is a closed administrative-territorial entity. Last time he came to the city in 2002, when the government was considering the issue of nuclear waste imports into Russia. The Yabloko faction in the State Duma was categorically opposed such imports. One of the arguments of the deputies from the Yabloko faction was absence of proper security for storage facilities. In order to prove this, Yavlinsky came to Zheleznogorsk along with another deputy from Yabloko, Sergei Mitrokhin. They walked unhindered to the vault and even climbed onto its roof. 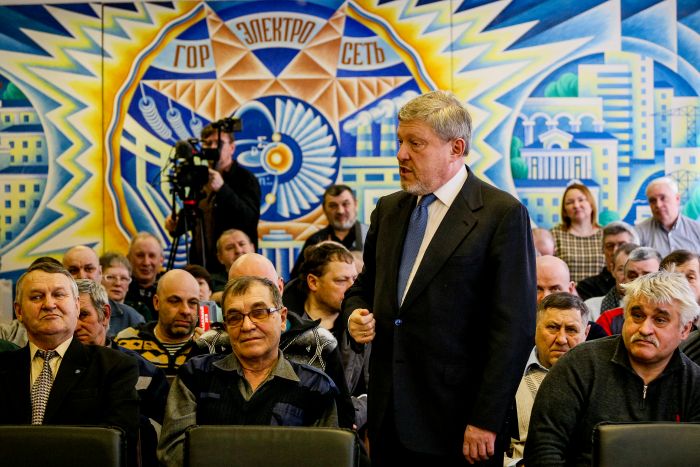 After returning to Moscow, Grigory Yavlinsky met with President Vladimir Putin and asked him how in such circumstances it was possible to take waste from around the world? Only after that, protection of a dangerous object was improved. Sergei Peshkov, head of Zheleznogorsk administration, assured Yavlinsky that at present the security of the storage facility was on the proper level.

Grigory Yavlinsky told the workers of the company why he had decided to participate in the presidential elections: “We have a very bad situation in the economy, and I, as a professional economist, want first of all to draw attention to this problem, and second, to offer a plan for creating a modern economy “.

According to Yavlinsky, the economy can not be raised unless the problem of poverty is solved, and the poverty in Russia is very high. To solve this problem Grigory Yavlinsky proposes to exempt from tax those families whose income is below the subsistence level, and also open special accounts where citizens could receive income from the sale of natural resources. Thus, residents of Zheleznogorsk could receive income from the operation of nuclear waste storage facilities, as the city carries an additional environmental burden, the presidential candidate said. 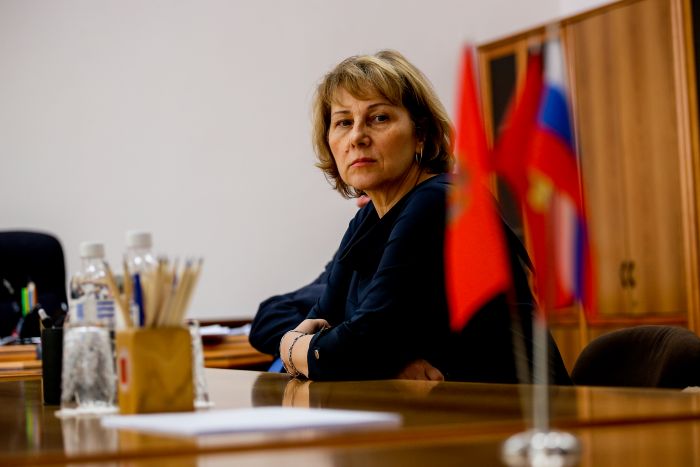 Oksana Demchenko, Chair of the Krasnoyarsk branch of the Yabloko party, who also took part in the meeting, noted that the regional branch of the party had been seeking to include in the agreement between Rosatom and Zheleznogorsk a point under which part of the dividends the state corporation should be transferred to the city budget. According to Oksana Demchenko, this money should go to the development of healthcare institutions in Zheleznogorsk.

Another task that the presidential candidate sets is withdrawal of Russia from isolation and lifting of the sanctions. He also added that it would be necessary to create a system in the country where all would be equal before the law, the court would be independent, property inviolable, and the person free.

Support of millions of voters of such a programme in the presidential election would allow to achieve this, Grigory Yavlinsky said. Whoever becomes president, he would reckon with such a number of votes and would have to carry out this programme.

Most of the meeting, Grigory Yavlinsky answered the questions of the electric grid employees. In particular, they were interested in what Yavlinsky thought about the idea of raising the retirement age. Grigory Yavlinsky spoke categorically against this initiative. He noted that the retirement age can be preserved as it is, not raised, if the economy works. But if the present government could not achieve this, then it should go away and give way to those who can do it.

One of the participants in the meeting asked Grigory Yavlinsky to explain how to solve the problem of the status of Crimea without violation of the interests of the residents of the peninsula. Another employee of the power grids was interested in whether Grigory Yavlinsky had received a response to an appeal to the president about the possible mass death of the soldiers of the private military company Wagner in Syria. There were also questions about the meaning of participation in the election campaign, if the “result was predetermined”. 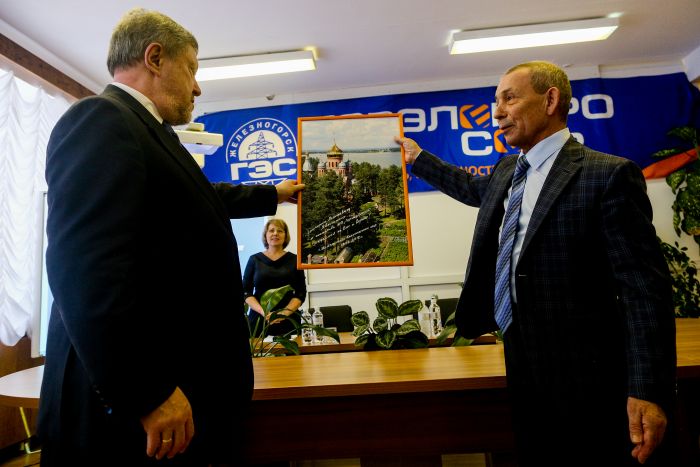 At the end of the meeting, the leaders of the power grids company handed Grigory Yavlinsky a picture with a picturesque local landscape. “We have faith in you and believe [in your victory]!” ran the inscription in the picture.

After this meeting with the workers of the power grid company, Grigory Yavlinsky met with Sergei Peshkov, Mayor of Zheleznogorsk. They discussed the issues of changing the budget policy proposed by Yavlinsky, and redistribution of tax revenues between the centre, the region and the municipalities in equal shares, as well as the peculiarities of the developments of closed administrative-territorial entities. 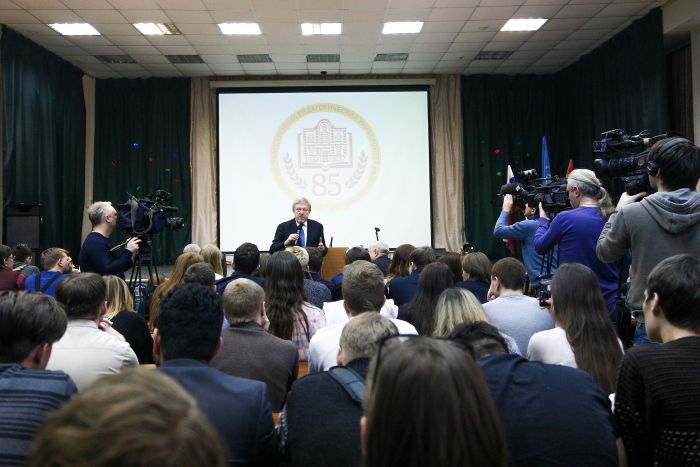 In the afternoon Grigory Yavlinsky addressed students and teachers of the historical and political science faculties of the Krasnoyarsk Pedagogical University.

The politics is made in such a way that it is not very effective to write programmes and persuade the governments to implement them, it is necessary to fight for the ideas and politically defend them, Grigory Yavlinsky said. 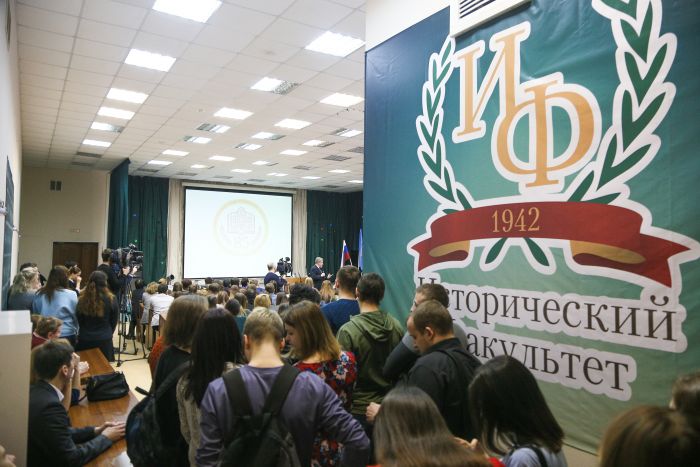 Only freedom, creativity and equal opportunities will provide Russia a decent future, the presidential candidate said. He defined freedom as living without fear – fear before violence, poverty and diseases. Freedom is the basis of creativity, and creativity is the ability to cross the line, risk, without being afraid of losing everything. The task of the state is to support citizens in these attempts. Then sooner or later there will be an astounding result, Yavlinsky added. 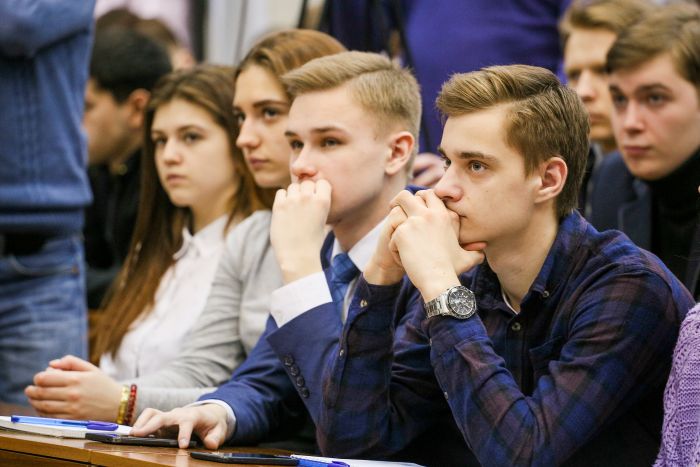 Many questions of the students were about the unfavorable ecological situation in the Krasnoyarsk Territory. According to Grigory Yavlinsky, the main reason for this was that in Russia business and power merged, the state became an entrepreneur, and instead of protecting public interest, it was engaged in extracting profits for a narrow circle of people. 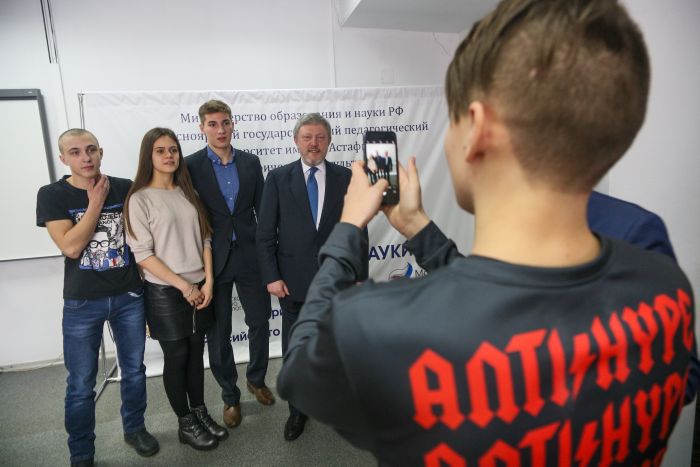 The students were interested in the role of Internet technologies in the election campaign. Yavlinsky explained that social media helped to maintain communication and the organisation, but were unable to develop meanings. In addition, in his opinion, social networks led to a significant fragmentation of the society. At the same time, Yavlinsky admitted that he read posts in social networks and was active in the Facebook.

New faces did not appear in Russian politics, because the authoritarian system of power was not interested in this, Yavlinsky noted, answering a question from one of the students. However, the Yabloko party plans to bring several dozens of young people into big politics for the next parliamentary elections, the presidential candidate said.

The goal of foreign policy, which President Yavlinsky will conduct, is the creation of a powerful economy. “To behave like a superpower, it is necessary to become it,” Grigory Yavlinsky reiterated. He called the Putin and Lavrov’s foreign policy a failure, and said that the war with Ukraine was a crime, and the military operation in Syria was a blunder.

Russia should not deal with foreign policy adventures, but with the arrangement of its own country. Yavlinsky told the students about his programme Land-Housing-Roads developed almost ten years ago and aimed at leading Russia out of its economic crisis via creation of domestic demand. The programme envisage allocation of plots of land to Russian citizens free of charge where they could build their houses, but the state should undertake to build roads and provide all communications to such plots of land. Yavlinsky also proposed that the state should give apartments to students who want to start a family as social housing.

Many of these questions were raised also at the meeting with residents of the Krasnoyarsk Territory, which took place in the conference room of one of the hotels on the evening of February 19. There again people spoke about protection of environment, problems with housing, difficulties encountered by small businesses in Krasnoyarsk, pre-election debates and much more. 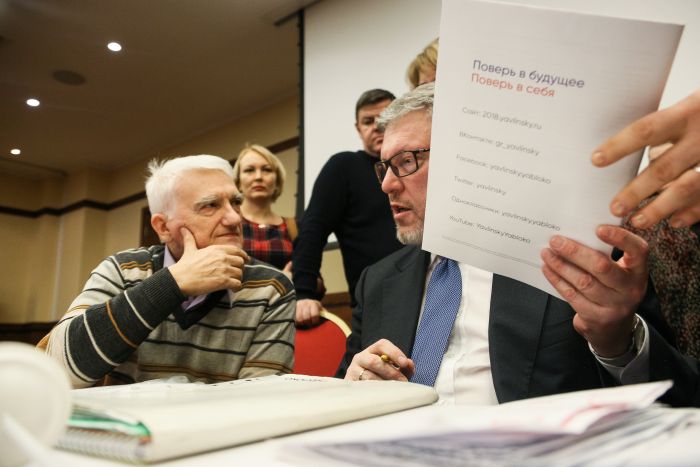 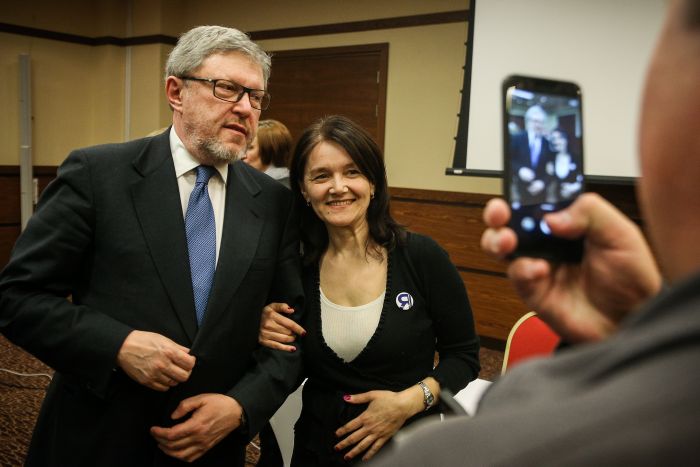 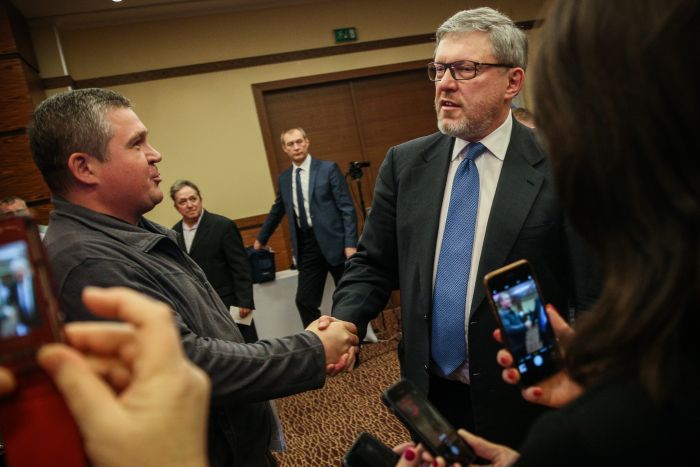