On 12 February, presidential candidate Grigory Yavlinsky visited Saratov, a city situated in the South-East of the European part of Russia. This is the fifth of Grigory Yavlinsky this year to a Russian region within the framework of his pre-election tour. Yavlinsky began his visit with laying of flowers in memory of those killed in the crash of a flight of “Saratov Airlines” to the monument of An-24 aircraft installed in front of the city airport. 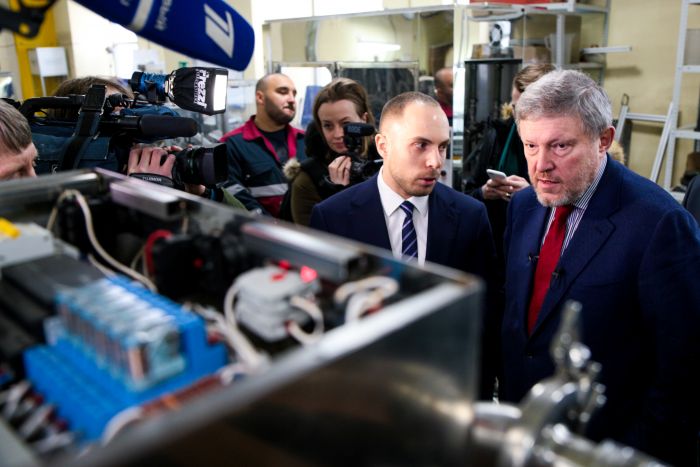 Grigory Yavlinsky held his first meeting at the Avrora Park Engineering company of the Aurora Group of companies. Yavlinsky inspected the production facility producing packing and packaging equipment, talked with the employees of the enterprise, and discussed with Mikhail Shaporov, Director General of the company, the business climate in the region and in the country in general.

Shaporov noted that one of the main problems of the enterprise was shortage of personnel. According to the entrepreneur, graduates of educational institutions do not meet the requirements of the labour market, and it was difficult to send them to study abroad. 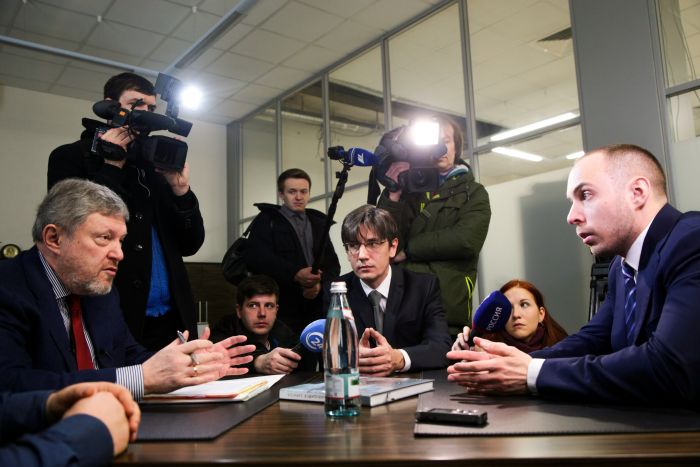 Grigory Yavlinsky stressed that the inability to fully implement personnel exchange and training exchange with countries of Europe and America was an integral part of a large problem of the Russian state – a closed and non-competitive economy.

“The main goal should be building a modern, open and efficient economy in Russia. We should not be distracted here by anything else! Certainly, this [solution of this problem] includes the problems of education, public healthcare, and demography,” Yavlinsky said.

Yavlinsky also told that he intends to release the machine-building enterprises from paying VAT.

Further Grigory Yavlinsky gave an interview to the radio station Ekho Moskvy in Saratov. In a conversation with the editor Olga Radina, Yavlinsky announced depressing figures for the region: one third of residents do not have sewerage in the houses, 20 per cent have no water piping. The first and the key steps to solve the problems of the housing and utilities sector in Saratov are return to direct elections of the Mayor, cancellation of the municipal filter in the gubernatorial elections, and change of the budget policy. 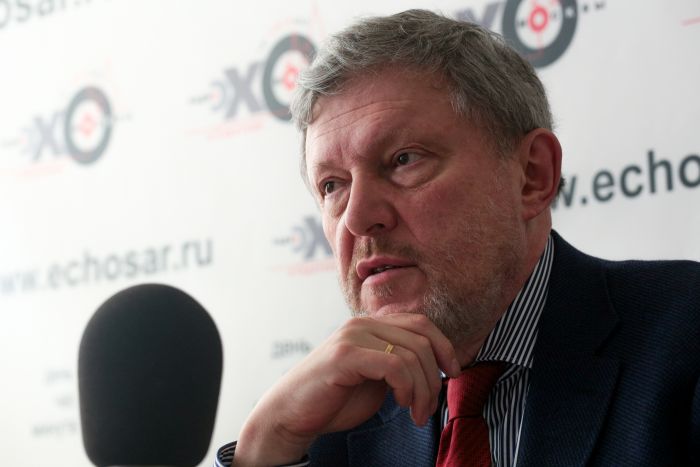 In the federal, the regional and the municipal budgets, should get per one third of the total amount. This will contribute to the development of entrepreneurship in the region, Grigory Yavlinsky said. The strategy for reforming the housing and utilities sector, overcoming the crisis and qualitative economic growth is set out in the book “Land-Housing-Roads”.

The next item of Yavlinsky’s visit to Saratov was the visit to the market place in the city centre, the most popular among the residents of the city. The sellers told Grigory Yavlinsky that the cost of production had been constantly growing, and demand fell significantly compared to the last year. 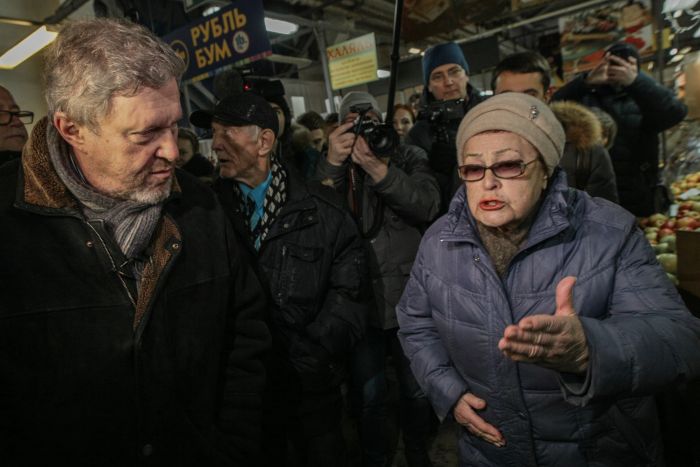 The visit continued with a sightseeing tour along the central streets. Some streets represent typical examples of chaotic development due to the illiterate urban policy. Old historical buildings are shadowed by tasteless new construction, public utilities do not function, and walks along unclean and broken roads are simply dangerous. 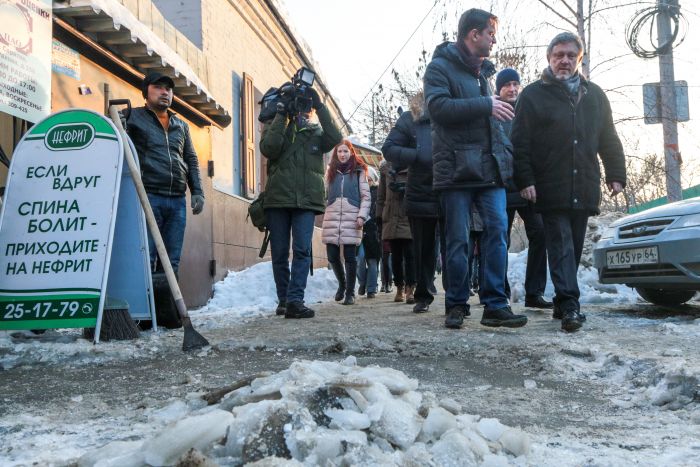 At the end of the day, after a briefing with representatives of federal and regional media, Grigory Yavlinsky met with residents of the cities Saratov and Engels. About 300 people gathered in the hall to talk with the presidential candidate, express support and ask questions about his programme. 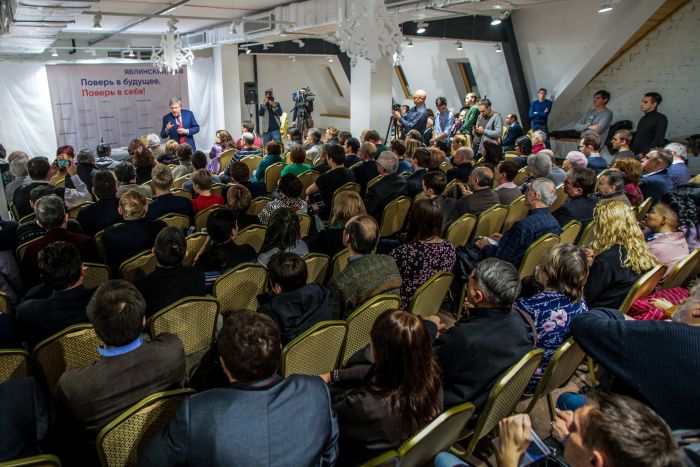 Yavlinsky presented the three main theses of his programme.

First, Russia needs a new competitive and truly stable economic system. A new economy under new laws and principles can be built only with a complete change of power. Yavlinsky devoted many years to the study of the Russian economy and knows how make the economy function. 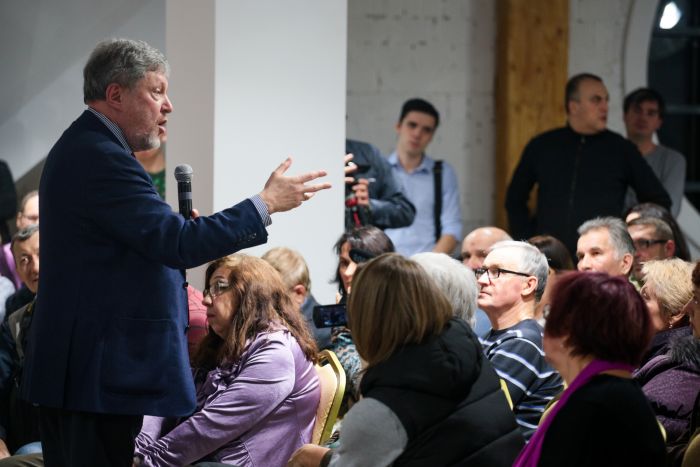 Second, Russia must overcome its isolation in foreign policy. The war with Ukraine and participation in the civil war in Syria is a cruel crime, against Russians too. It is necessary to establish good neighbourly relations with the world and agree on lifting of the sanctions. Despite the government’s propaganda, sanctions do not benefit the Russian economy: every year we lose about 3 trillion roubles, which exceeds the budget for education and healthcare.

Third, it is necessary to save citizens from constant fears of poverty, arbitrariness, war. 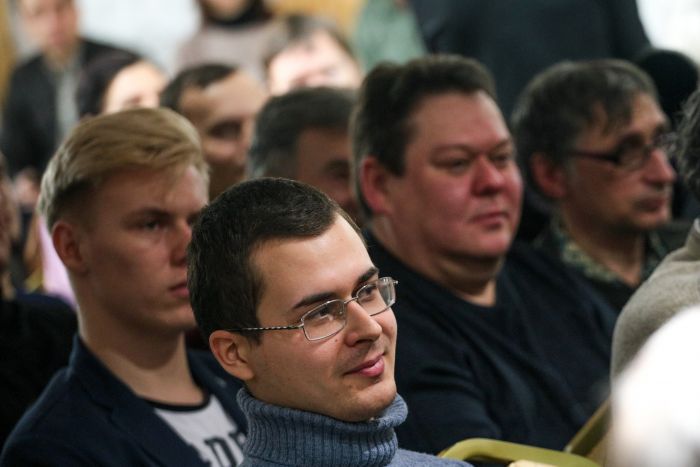 Saratov has become the fifth region that Grigory Yavlinsky visited in 2018 as part of his presidential campaign. Before that, he visited Rostov-on-Don, Samara, Pskov, Novgorod, and last year Yavlinsky met with voters in Ryazan, Vladimir, Tomsk, Kazan and Yekaterinburg. This week Yabloko’s presidential candidate intends to visit St. Petersburg.