On 8 February, presidential candidate Grigory Yavlinsky visited Rostov-on-Don. In the afternoon he addressed the students of the Southern Federal University, and in the evening he held a large meeting with residence of the region.

Speaking before the students of the Institute of Philosophy and Political Science of the Southern Federal University Grigory Yavlinsky told that “In the next month and a half, it will be decided in which country you and your children will live”. 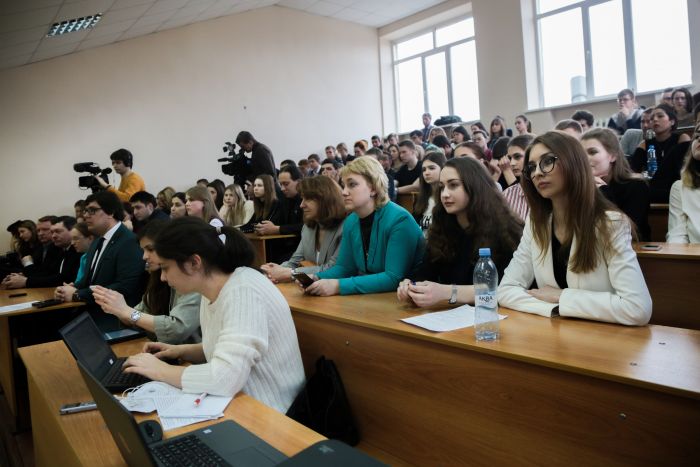 According to Yavlinsky, the Russian economy is in a deplorable situation, its growth stopped a few years ago. “If the economic mechanism stops functioning and there is no growth, then there is growth of poverty and there develop processes leading to a systematic and frontal lag from other countries, and the rival countries,” explained Yavlinsky.

The sanctions imposed on Russia are painfully hitting our economy, the country annually loses 3 trillion roubles from sanctions, which is comparable to the budget of the whole sector of education or the healthcare sector. Yavlinsky called on those who rejoice at the sanctions, naively believing that the sanctions could contribute to the development of Russia, not to have fun “in a childlike way.” “Our economy is a part of the world and can not exist without it,” he said. 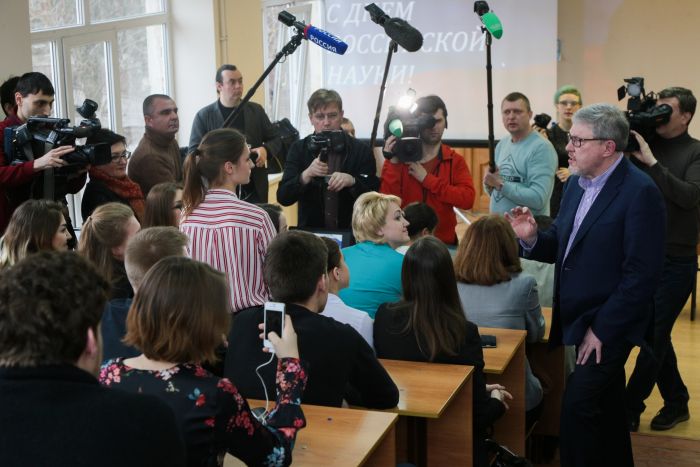 Yavlinsky stressed that in order the change the situation millions of people should come to the polls. Only freedom, creativity and equal opportunities for all people can ensure Russia perspectives, and this is precisely what Grigory Yavlinsky presidential programme is targeted at.

Students prepared a surprise for Grigory Yavlinsky, an improvised exam. The politician had to pull tickets, and answer the examiner’s question – a question for a student who had prepared the “ticket”.

Does Russia have its special way of development? Do we need an “against all” line in the ballots? Why are there no new faces in Russian politics? Why are political blocs and coalitions forbidden? What should be the foreign policy of our country? What Yavlinsky can do as a legislator? Also Yavlinsky had to speak about political advertising, public relations and the image of the Yabloko party so that to “pass the exam”.

Grigory Yavlinsky said that Russia is a European country, and Putin’s “special way of development” leads the country to the Developing rather than the Developed World. He expressed confidence that the line “against all” should be on the ballot, but he urged students to always vote “for” what they find close to them, rather than simply vote “against”, and never choose the lesser of evil of the two, since on getting the power the lesser evil always grows in to a big one. The reason for the lack of new persons in politics is that there is no political competition in Russia. At the same time, Yabloko plans to “raise” 50 young politicians for the next parliamentary elections.

While there is no political competition in the country, there is no full-fledged profession of a political consultant or political technologist, Yavlinsky said, answering questions from students of the Faculty of Political Science. 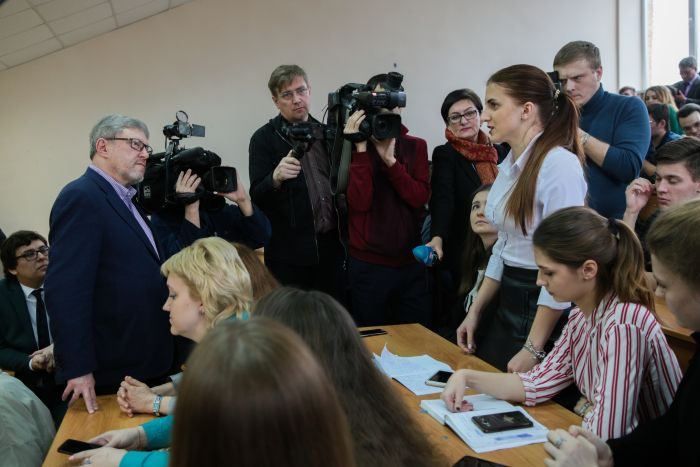 Blocs and coalitions were banned by the United Russia party at the dawn of Putin’s presidency to ensure political monopoly. The Yabloko party was created as a coalition of different political forces, and even in the conditions of repressive laws it continues to unite allies around Yabloko, and even has the words “unified democratic” in the party’s official name – the Russian United Democratic Party Yabloko.

Foreign policy should also aim at creating a powerful economy in Russia, Yavlinsky stressed. Without this, Russia would never be among the world leaders. “To behave like a superpower, it is necessary to become a super power,” Grigory Yavlinsky reiterated.

According to Yavlinsky, one of his most important legislative initiatives would be equipping all police stations and police cars with video fixing. And no court decision should be taken without mandatory inspection of these records. This will protect citizens from police arbitrariness, and the police from provocation, Yavlinsky said. This bill lacked just one vote for its adoption by the city parliament of St.Petersburg.  Another important initiative is a block of laws relating to implementation of the Land-Housing-Roads programme which should create domestic demand in Russia and lead the country out of the crisis.

Yavlinsky answered all the questions from the students and got an “excellent mark” from his “examiners”. At the end of the meeting the students presented Grigory Yavlinsky with his portrait. 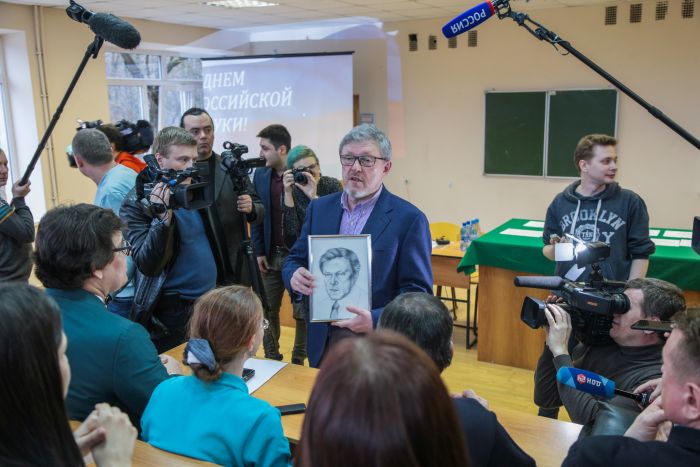 In the afternoon Grigory Yavlinsky gave an interview to the Don TR television channel and answered the questions of the local press. In the evening he spoke to voters at a big open meeting.

The conference hall of one of the hotels could not accommodate everyone who wanted to listen to Yavlinsky and ask him questions, so the team of the presidential candidate had to quickly find a new larger site.

Speaking to the audience, Grigory Yavlinsky called Rostov-on-Don a city with a powerful entrepreneurial energy. At the same time, the living standards in the region leave much to be desired: the average wage does not exceed 28,000 roubles (approx. USD 466), while about 20% of Rostov residents receive less than the subsistence level. An average doctor’s salary is 56% less than it should be according to the May decrees of Vladimir Putin. Rostov-on-Don is ranked 128th in a rating of 250 largest Russian cities as of quality of a life. 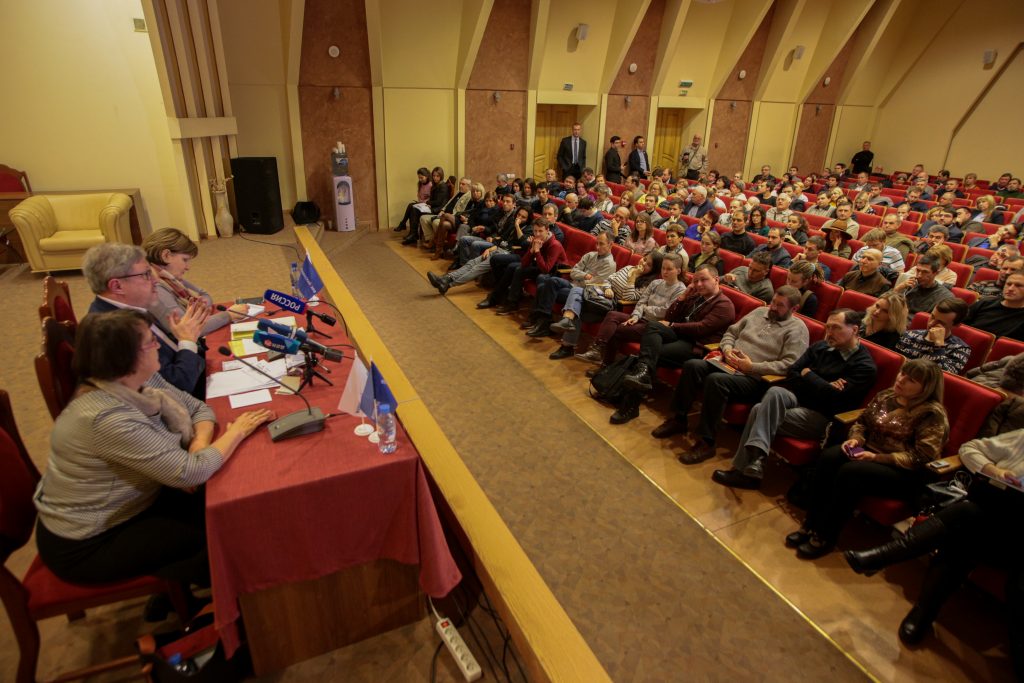 Grigory Yavlinsky once again stressed that his main goal was creation of a powerful economic mechanism in Russia.

He said that the forthcoming elections were a referendum, where dozens of millions of people should clearly show what other policy they support. “These are elections about how to get anyone who becomes President to implement another programme,” Grigory Yavlinsky said. “Only the people can do this, neither demonstrations or riots can.”

Many questions referred to the situation with Crimea and the war in the Donbass region on which the Rostov region borders. Voters supported Grigory Yavlinsky’s proposal on holding an international conference on the status of Crimea and his plan for settling the situation in Donbass. These proposals were greeted with applause. 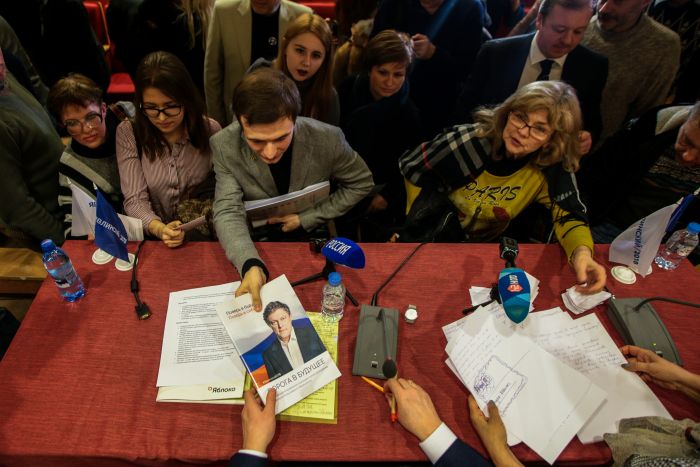 The Rostov region has become the fourth region that Grigory Yavlinsky visited in 2018 as part of his presidential campaign. Before that, he visited Samara, Pskov, Novgorod, and last year Yavlinsky met with voters in Ryazan, Vladimir, Tomsk, Kazan and Yekaterinburg. Next week, Yabloko’s presidential candidate intends to visit Saratov and St. Petersburg.