The Perm region became the ninth region that presidential candidate Grigory Yavlinsky visited this year. The whole day of 26 February, he spent in Perm: in the afternoon he visited one of the confectionery factories, and in the evening held a large meeting with the residents of the city.

“Small businesses are the foundation of the whole economy. They feed themselves, they pay wages to people, provide consumers with their products and feed the whole country with their taxes, ” that is how Grigory Yavlinsky explained to journalists why he began his trip to the region by visiting a small business enterprise – the confectionery factory Sofia. 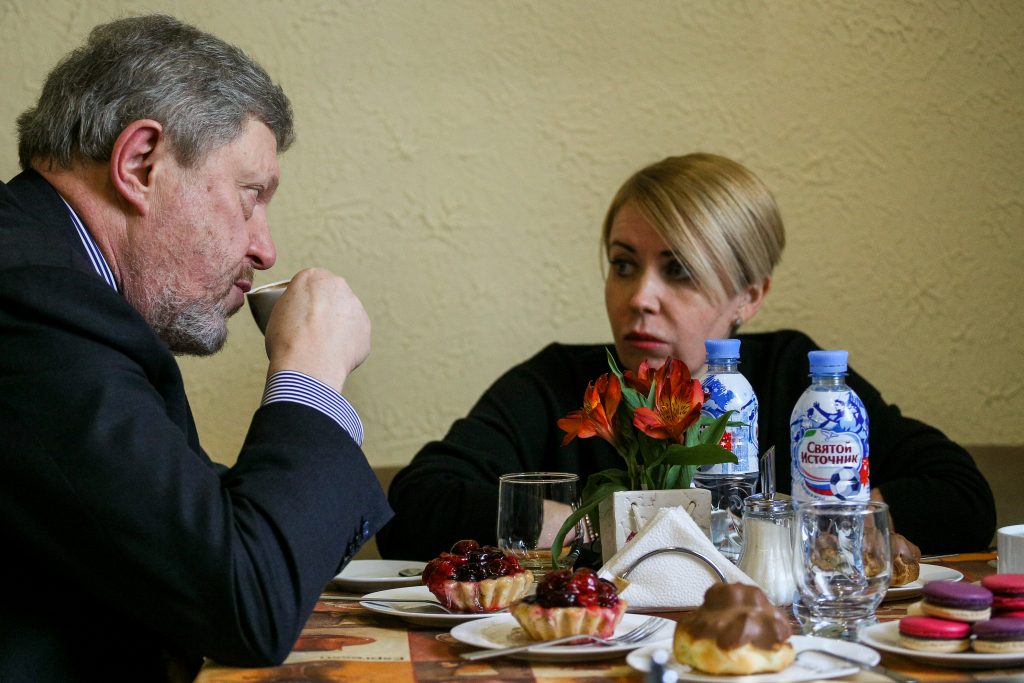 Olga Kuznetsova, Director of the factory, treated the presidential candidate with cakes and told him about the problems her business had to face in a small cafeteria at the factory. Since 2014, the personal incomes has been falling and together with the demand for confectionery products, Olga said. “When there is no money, you don’t buy cakes.” Retail chains, that sold  the products of the Sophia factory,  went bankrupt one by one, and the controlling agencies were striving the business with their checks and audits. “There is not a single supervision body, which would not check us,” Kuznetsova noted.

After a meeting with the company’s management, the presidential candidate inspected the production facilities and talked with the factory staff. One of the women, the shift supervisor, told Grigory Yavlinsky that together with her husband, an airport employee, they receive only 30,000 roubles (approximately 428 Euro), whereas 7,500 roubles they had to pay for their one-room apartment. The family has two children, and 2,500 roubles goes for a kindergarten fee, another 1,500 for school. Another factory employee told Yavlinsky that she worked as a milkmaid on the collective farm for 25 years, but her pension is only 9,000 roubles (approximately 128 Euro), taking into account the additional payment for disability. 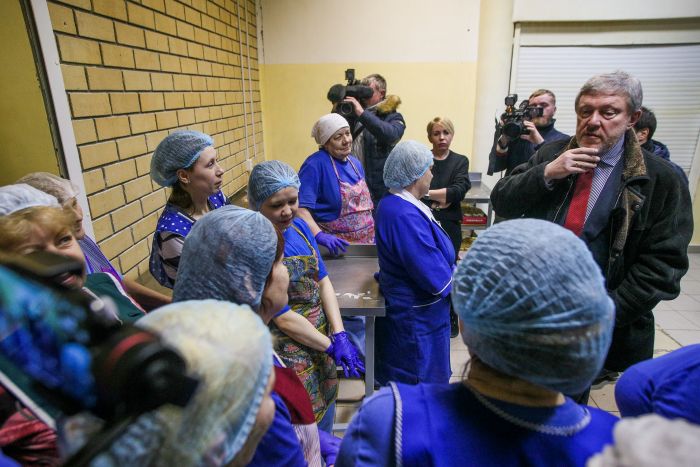 Photo: Meeting with the staff of the Sofia factory

Grigory Yavlinsky noted that in his presidential programme he offered to release poor people from paying income tax. Another measure to support such families should be opening personal accounts for citizens where the state would transfer them their share of revenue from the sale of oil and gas.

At the end of the meeting, Grigory Yavlinsky thanked the factory owners and employees for the warm welcome. “If we want to live in a sovereign and great country, we need to have a strong economy, and it is impossible to develop the economy without developing small businesses,” the presidential candidate stressed. 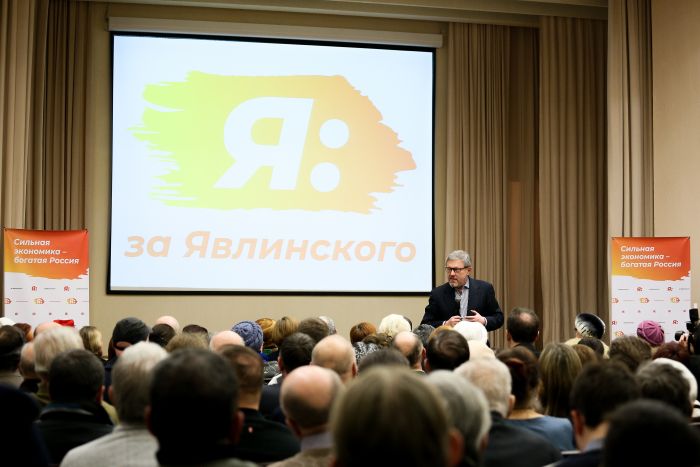 In the evening Grigory Yavlinsky met with residents of the Perm region. In a brief introduction, he said that Vladimir Putin’s system had exhausted itself, and such policies led Russia to greater poverty, isolation and a split between society and the state. According to the politician and economist, in three or four years the situation in the country would become irreversible. Russia needed a different policy aimed at overcoming poverty and creating a strong economy. It would be impossible to ensure the integrity and security of Russia without such new policies, Yalvinsky said.

Yavlinsky called the upcoming election an “all-Russian referendum,” when people have a rare opportunity to demand a change in the political and economic policies. Whoever was elected head of state, he would not be able to ignore the demands of millions of Russians, Yavlinsky noted.

Yalvinsky promised that in case he was elected President, he would rely on the interests of people and create an atmosphere without fear, but with confidence in the future.

The meeting lasted two and a half hours, two of which the presidential candidate answered questions from the audience. In particular, he was asked about the growth of utilities tariffs and the situation with residential housing. Yavlinsky proposed introduction of housing standards and exempting those citizens whose home or apartment did not meet the requirements of this standard from paying the housing and utilities fees: “You do not pay for a bus that does not carry you anywhere, why should you pay for housing that is not housing? ” 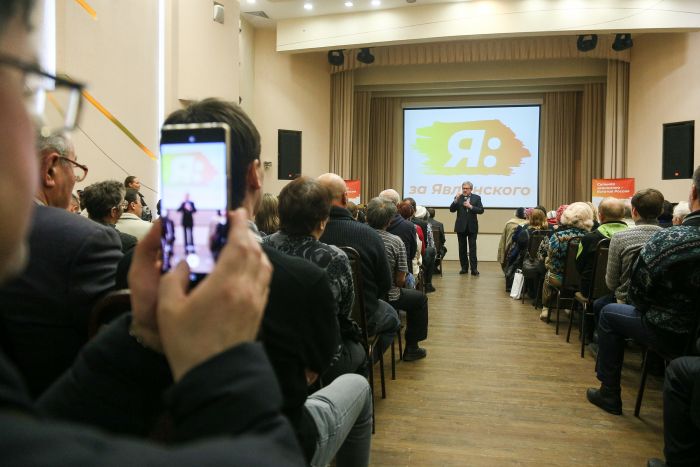 People also asked about local self-government, which, according to Yavlinsky, was completely devoid of financial base and, therefore, incompetent in Russia. The presidential candidate proposed to leave a third of all collected taxes on the municipal level.

There were many young people in the audience and they were interested in what the youth policy of President Yavlinsky would be, and why his programme was called “The Road to the Future”. “I will pursue such a policy that young people will not want to leave the country,” Yavlinsky answered. “They will have the opportunity to get good education, a well-paid job and a small, but their own, apartment. And most importantly, they will be able to engage in creative work.” The section of Yavlinsky’s programme dealing with the youth policies also included payment of grants for training the most talented young people in the best universities in the world.

Freedom, creativity and equal opportunities would provide Russia with a road to the future, Grigory Yavlinsky said. The industrial economy could be built by barbaric methods, but only free people can create the post-industrial ecnomy, he added.

The participant of the meeting also spoke about historical parallels. One of the participants said that the fact that two presidential candidates in these elections openly praised Joseph Stalin represented “restalinisation”, the return of Stalin’s era. Grigory Yavlinsky agreed with this assessment. “The restoration of Stalinism is a crime against the future, this is a sign of an extremely low drop of public morality and perception of our own history,” the presidential candidate said. The system of total lawlessness led to complete and final poverty, he stressed.

Voters also asked why to participate in elections if their outcome was known in advance. Grigory Yavlinsky spoke about the absurdity of the boycott: “This is a waiver of one’s own rights. You can not fight the regime by idly lying on the couch.”

Grigory Yavlinsky said that the situation in the country could change if each of his supporters brought ten more people to the polling stations. “Life is full of surprises, and no one could have imagined that in Moscow in the municipal elections of 2016, in the area where Vladimir Putin voted, 12 out of 12 mandates would go to Yabloko,” the presidential candidate recalled. 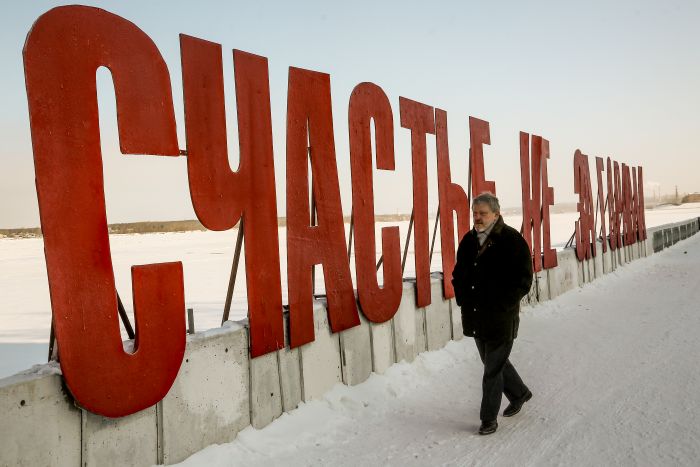 Photo: Grigory Yavlinsky at the art-object “Happiness Is Not Far Off” on the Kama river embankment