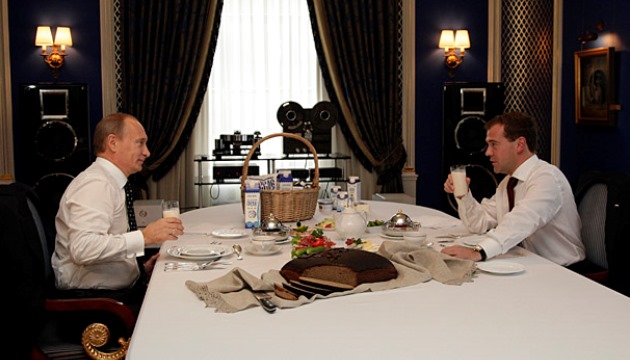 The decision by the Russian government’s to extend the “anti-Western” food embargo until the end of 2017 can not be regarded otherwise than economic stupidity. “Beat your people to frighten all the other”. This is a familiar logic – to punish one’s own citizens for serious foreign policy errors and blunders of the authorities.

Russian mass media spread strange information – against the backdrop of weakening economy and for maintaining the “fighting spirit”: “Western countries losses due to Russia’s food embargo constitute 9.3 billion dollars, as estimated by experts of the analytical centre of the Russian government”… And add to make it even more absurd: “The expansion of the embargo in the 2015 onto Iceland, Albania, Montenegro and Liechtenstein amount to another 241 million dollars”.

But the situation for the Russian economy is clearly bad. Sanctions, certainly, hurt, but our economy has been falling not because of them, but because of the reduction in domestic demand – the population is getting poorer. In June 2014, Russia imported goods for 27.4 billion dollars, and in January 2016 only 9 billion dollars. In 2015 Russian imports from the EU dropped by 40.8 per cent and imports from Kazakhstan fell by 35.5 per cent, by 39.4 per cent from Turkey, and by 49.4 per cent from South Korea.

By the way, the estimations that were published show that after Europe has adjusted to the new conditions, now with the lifting of the sanctions, exports from the EU to Russia are expected to grow only by 4 – 6 billion euros per year, i.e., by 0.3 – 0.4 per cent of the total EU exports. In other words, the introduction of anti-Russian sanctions, coupled with Russia’s countermeasures have no significant economic value for the developed countries. It is as a spider to an elephant, as they say. The losses of European and American business are less than one per cent. For us, the sanctions represents a serious problem that will have very unpleasant long-term consequences.

In general, the situation is bad: the potential of the present economic and political system is exhausted, and there are absolutely no signs that the country’s leadership is ready to change the policies and conduct thorough reforms. Instead, there are simulations of discussions and debates the meaning of which is that nothing should be truly changed, and the system of embezzling of the budget, kickbacks, theft of the budget, television lies and boundless narcissism should be maintained. However, it is impossible to fool the economy: sooner or later problems such as the technological gap, rising prices, low quality of life, reduction of real incomes, poverty and lack of rights for the population, will stand upright.