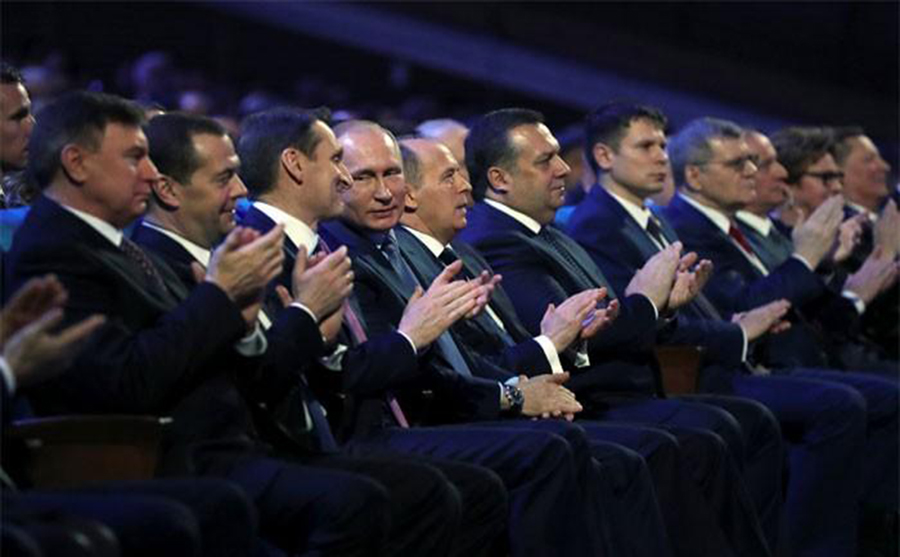 The power struggle between the groupings [in power] seems to be gaining momentum. Last week, Public Prosecutor General attacked simultaneously the Federal Security Service (FSB), the Investigative Committee and the Interior Ministry. It followed from the report of [Public Prosecutor General] Yuri Chaika that the number of corrupt officials in the aforementioned law enforcement agencies increased during the year, while the FSB held the palm with a twofold increase the number of identified corrupt employees during the year.

In addition, Public Prosecutor General in his report sent to [the upper chamber of the Russian parliament] the Federation Council, reported on corruption in state corporations responsible for the most sensitive areas for the government: it was about embezzlement in Rostec (the State Corporation for Assistance to Development, Production and Export of Advanced Technology Industrial Product Rostec) and Roscosmos (the State Corporation for Space Activities) in the amount of 1.6 billion (!) roubles. And so that not only the Federation Council could learn about the theft, the report of [Public Prosecutor General] Yuri Chaika was also sent to RIA Novosti news agency (and urgently, in the middle of the night). But the statement of Public Prosecutor General about corruption in the state-owned corporations does not result from investigation of criminal cases, but only represents a loud accusation, the purpose of which, as is the case with the law enforcement and security agencies, is discreditatilon of the leadership (of Rostec and Roskosmos), reduction of the influence (of Mr.Chemezov and Mr.Rogozin), making it clear that, if necessary, anyone can be removed at any time: there are too many reasons for it. And, certainly, these are not the initiatives of the Public Prosecutor General’s Office, but a direct instruction of the Kremlin so that all would know their place.

Other groupings are also catching up for the squabbles. On the one hand, the arrests of Mikhail Abyzov, former Minister, and Viktor Ishayev, former Plenipotentiary of the President, directly hurt senior government officials, and, on the other, are related to the leadership of Rosnano and Rosneft.

The “intergroup” aggravation of the situation is primarily conditioned by redistribution of power and property, expected in the next five years. Hence, the attempts to bring Belarus to heel, create a quasi-state headed by the same leader for another 12 years, in order not to change anything at all.

Mr. Volodin’s [Speaker of the State Duma] dispute with [Prime Minister] Medvedev about the formation of government with the help of the State Duma, is, virtually, about the same thing — finding the ways of transit and redistribution of power that would be beneficial for certain groups. But this is not about the Constitution, and certainly not about the development of the country. This is probing of Putin’s sentiments regarding the restructuring of the power vertical and the search for one’s place in it.

And people, in fact, understand this. Almost a third of Russians polled called the demonstrative arrest of Senator Arashukov “a struggle for redistribution of spheres of influence between high-ranking officials”. However, now it is not just squabbling for “a place in the sun”, it is a fight for Big Power: the winner will be able to determine the future of the country.

If for the past twenty years it has been obvious that Putin’s fullness in one way or another will remain, then today there is no clarity about anything. There, “above,” there is no confidence either in oneself, or in one’s environment, neither in the country, nor in people, nor in the situation in the world.

It was obvious in the past twenty years, that Putin will preserve full power in one way or another, but today there is no clarity about anything. There is no confidence on the “top” either in oneself, or in one’s environment, or in the country, or in people, or in the situation in the world.

The regime is coming into the transit period. The upcoming domestic political crisis represents a significant imbalance of the system. And the law enforcement and the security agencies, who have merged with organised crime, oligarchs and higher bureaucracy, proposed to make use of it (we are already using it as we can see). But despite the fact that they intend to ruthlessly destroy each other in the struggle for power and at the redistribution of property, all these groups are united in the main thing – in their desire to preserve the system. To make the transit an intrasystem one.

And where is the society here? What role will intellectuals, academics, engineers, professors, people of creative professions, students, workers, real entrepreneurs, farmers and pensioners play in changing the government? Where there will be the people who are absolutely dissatisfied with the mafia state created in the 1990s and flourishing under Putin?

Today, all these people are not represented in politics. The people are generally removed far from the power, and only the role of an observer is prepared for the people in the in the intrasystem transit of power. There are no mass civil political parties in Russia, there are no independent and large trade unions, there are almost no free, politically influential media. This means that in such a situation, the power will again be seized by functionaries of the present mafia state and there will simply be no one to represent the interests of Russian society. This situation should be corrected as soon as possible. But how?

If there is even a relatively small organised group with a clear political goal during the period of domestic political crisis, then, exactly due to instability of this system, such a group will be able to achieve very much, will be able to start changing of this system. This is exactly the rare moment when something can be done and changed. This is a feature of the crisis period, there are quite a lot of historical examples of it. However, in order to take advantage of this opportunity, the society needs to take an active position. And this position is not to “lean” in the ongoing clashes to the participants looking more “liberal”. And it is not to look for the signs of “thaw” in the transfer of someone from the remand prison to house arrest or in replacing house arrest by a written undertaking not to leave the place. Active position is in real participation in political life.

But where can one find strength for this? In yourself – if you are sure that you are right and ready to take responsibility for the country. In people, if you do not treat them like herd, if you respect your people, whom the authorities regard as a cheap resource.

Everyone takes his own decision to what extent he should participate in politics. But if nothing is done now, the Putin system will be maintained and the mafia groups that have won the internal war will consolidate the power in the country will firmly and permanently in their hands. And the society will be out of the running here. Thus, we will be walking in circles inside the system, like a circus horse in the arena running after a bag of oats.

In order to break the circle of intrasystem transit, in order to start liberating the country from the mafia, so that to participate in building the future, there should be more of us, our position should be clearer, and our voice louder.

I am sure that there are millions of people who hate violence, war, obscurantism and lies in our country. But only by joining together can we influence what is happening. And the more of us will be there, the louder our voice will be, and the more significant the impact will be. Only personal participation can be a guarantee of success. The result will be determined by those who participate. And now, on the eve of the turning point, it is the best time to enter politics. A political party that unites hundreds of thousands of people, with the common goal of building a free modern Russia, based on the principles of honesty, justice and respect for a person, can become an influential factor in politics, its voice will be heard, it will be taken into account. Virtually the only chance to withstand and begin to transform the system is organisation of political resistance, which begins with a massive unification in the ranks of the opposition party.