Convening an international conference will mark the beginning of a peace policy towards Ukraine. The Russian authorities must refuse to support the expansion of the civil war in the East Ukraine, war propaganda in the state-owned media and stop spreading the myths about the dangers of the European course of development for Ukraine and Russia, runs the statement adopted by YABLOKO’s Political Committee on Saturday.

"YABLOKO’s proposal from 9 March, 2014, on the convening of such a conference is still relevant, furthermore, each day of the ongoing bloodshed in Donbass makes it more urgent. We believe that it is in Russia’s interests to turn the statement on a possibility of convening such a conference made by Sergei Naryshkin, Speaker of the State Duma, on 23 June, into an official initiative of the Russian leadership, " runs the document.

YABLOKO believes that, given all the developments of the past six months, it is unrealistic to expect that the present Russian leadership will undertake serious effort to change their present policies towards Ukraine.

However, the fact that the President initiated cancellation of the Federation Council decision made in March on the use of Russian troops in Ukraine represents a step in the right direction.

"The conference should discuss not only how to stop the bloodshed, but the whole complex of issues related to the situation in Ukraine and around it, the guarantees of security and good neighbourliness for Ukraine and the bordering countries," states YABLOKO’s document.

Such a conference will create a new format of negotiations and allow to overcome the present deadlock and lack of understanding between the key actors. 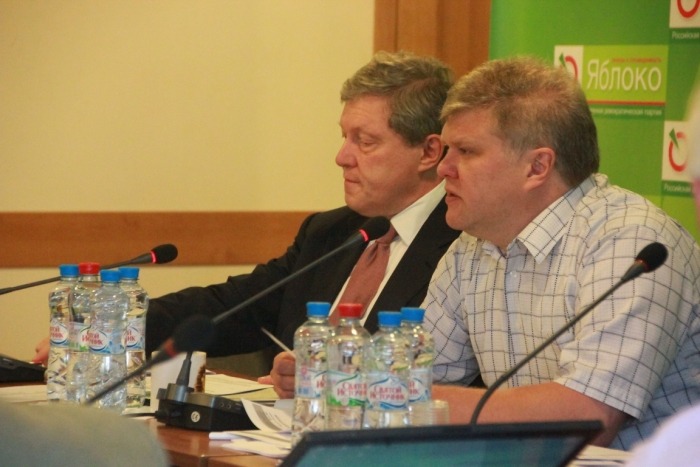 This conference should be regarded as the main way to overcome the crisis, rather than an additional instrument of the previous policy.

According to YABLOKO, the key to success for Russia is real and complete rejection of any support to expansion of the civil war in Eastern Ukraine. "We need to stop throwing people into this fire and raising it by deliveries of weapons and sponsorship!" runs the statement of YABLOKO’s Political Committee.

"We are urging the society, the Russian government, the media - especially state-owned media - to abandon calls for war and war propaganda," YABLOKO indicates.

"From our point of view, Ukraine, Georgia and Moldova, who sighed the Association Agreement with the EU on June 27, are establishing a solid foundation for the future of their citizens. The necessary economic reforms will not be a challenge and require much effort, but after a while will lead to a qualitative change in the economies of these countries and pave the way to development to a level pertinent of the 21st century," YABLOKO’s Political Committee notes.

"The main political task for our party has been the struggle for the European way of development for Russia, rejection of the anti-European policies and Russia’s return to its prospective natural [European] development. Formulation of peaceful policies towards Ukraine is a necessary pre-requisite for this task," YABLOKO’s Political Committee concludes.