International Conference “Liberal Values Versus a Conservative Trend in Politics and Public Life in Europe” organized by the Alliance of Liberals and Democrats for Europe (ALDE) party and its full member YABLOKO was held in Moscow on October 11. 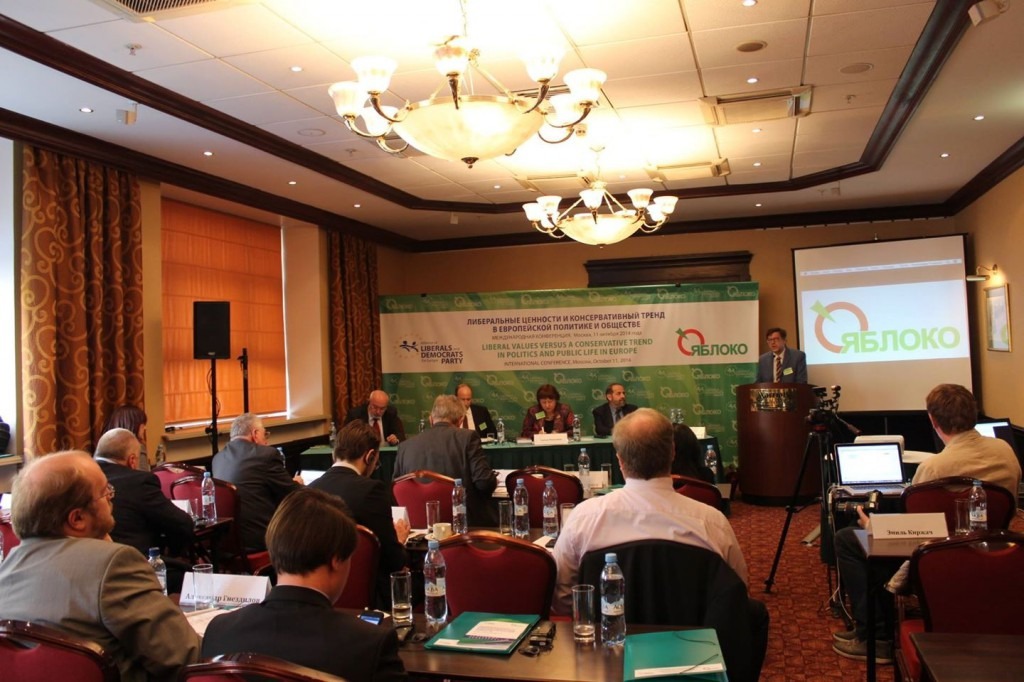 Opening the conference Dr. Galina Mikhaleva, Deputy Chair of the Moscow YABLOKO, noted that the a joint YABLOKO-ALDE conference was held in Moscow for the fourth time. The first conference was devoted to the issues of gender equality, the second – to combatting extremism among youth, and the third – to the problems of migration. 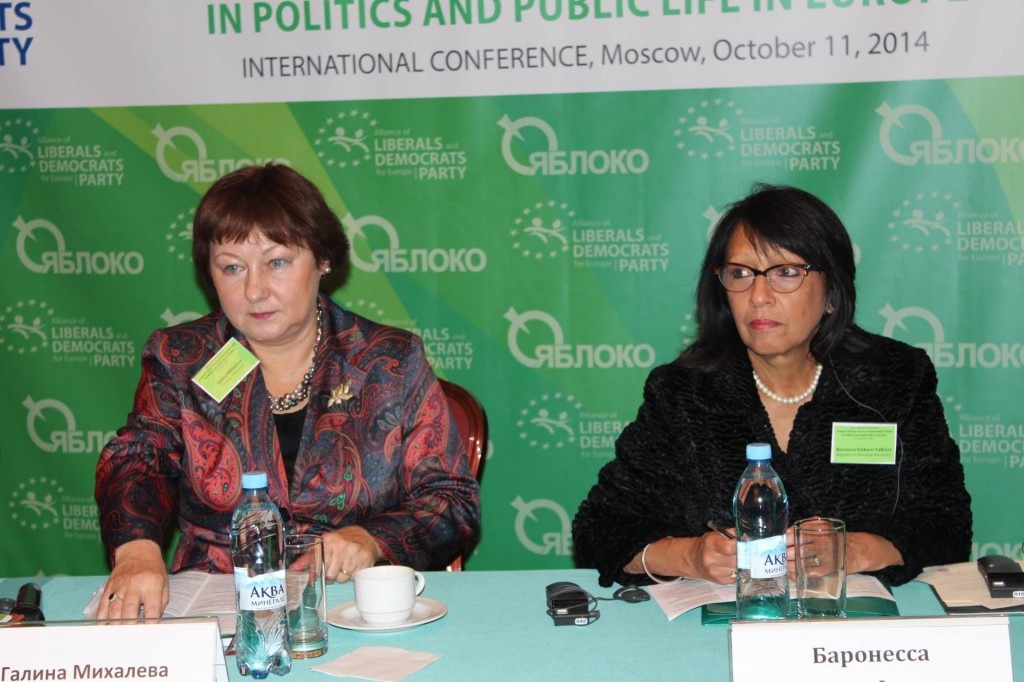 “This conference is devoted to the very serious, deep and philosophical problem of the conservative trend in politics and society,” Mikhaleva said. She also wished the conference participants fruitful work.

Sir Graham Watson, ALDE party President, noted in the video address to the conference that the topic was “very important for development of democracy in Europe”, noting that Mr.Putin’s, Mr.Orbans and Mr.Borisov’s attemps to preserve the present existing power structures which means no fight against corruption, intimidation of the freedom of expression and protection of those who are exploiting others. “It is imperative for liberals to win the day”, he stressed.

ALDE Vice President Olle Schmidt stressed that Russia had been a very important player in the European context, but “the core liberal values had been threatened and questioned in these days” both in Russia and the EU which created problems throughout the continent.

YABLOKO founder Grigory Yavlinsky stressed that the events of 2014 demonstrated turning away from the common sense even, rather than abolishing liberalism and rushing towards conservatism.

“The internal and external policy of the country is bad both for the conservatives and the liberals, for the left and right, because it leads to chaos, destruction of the rules of life both within the country and the world in general,” Grigory Yavlinsky said.

Creation of the European Union after the world wars became a model to overcome the crisis of civilization Europe was in in the first half of the 20th century. “Therefore, the Russia’s statements that “Russia is not Europe” presents a dramatic threat to the civilization. It is serious because it turns into practical politics,” he noted.

According to Grigory Yavlinsky, “Russia’s national interest means truly European Russia in terms of domestic and foreign policies and the way of living.”

YABLOKO Chair Sergei Mitrokhin in his report mentioned three factors that facilitated the ‘conservative turn’ in Russia. These are the failed Russia’s reforms of 1990s; rent-based economy emerging in 2000s (the rentier state); and the threat of Orange Revolutions.

He noted that liberal ideology emphasized more universal values and had its normative base; whereas conservatism based on its own national tradition.

“Russia did not have the values of freedom in its basic traditions. They were introduced quite late and have always been marginal,” he said.

“In Russia, these values were once formulated by Count Uvarov: Orthodoxy, Autocracy and Nationality. The specifics of such conservatism lies in the negation of liberal values,” he said.

Sergei Mitrokhin noted that ideas of progress, liberalism and modernization may win in Russia only at abolishing some national traditions.

“Our conservatives rely on a mixture of different elements of various traditions, they take the experience of the autocracy, involve the Orthodoxy which has little to do with deep religiosity, it is based on ritual and is compatible with national-Bolshevism and Stalinism,” he said.

“For a country like Russia, which is, as they say, is a country of a catching-up development, liberal values are associated with a positive attitude to modernization and progress. Conservatism is always a reaction to this, it is always a denial of this, ” he said.

Sergei Mitrokhin also said that the present Russia’s policies represented reactionary conservatism, which had been “fiercely denying event the formulation of the problems that Russia should develop in a European way”.

Patriotism in the tradition of such conservatism is not simply a deep feeling of a person to his homeland. This is a morbid emotion distracting people from the problems emerging in the rentier state, that is, corruption, social stratification, and other pressing issues. The government in such a state brainwashes the society so that to make it anti-Western.

“The annexation of the Crimea and covert intervention in the South-East Ukraine represents a consequence of this brainwashing, as it is impossible to support emotions with words only, actions are needed here,” Mitrokhin stressed.

He emphasized that the liberal ideology aimed at the development of the country, the welfare of all its citizens, and the conservative ideology focused on the territorial expansion and extension. All this smoothly turned into the imperial project.

Sergei Mitrokhin concluded that Russia, unlike the rest of the world, was moving in the opposite direction, hence the degradation of values in the society reflected in the growth of intolerance and xenophobia.

“Everybody understands that the regime can not exist for a long time in its present form. We have to think about what will happen after that. The whole story may end in aggressive nationalism and fascism,” Mitrokhin said.

But if the Nazi regime is a danger that may happen, a big lag in development has already happened due to the present policies of the government.

Mitrokhin also noted that the Russian people is very talented, but its development is possible only in freedom. Now freedom is limited, so many people are leaving the country.

“We are the force that can unlock the power of the nation leading us to prosperity and global competition. First of all, we need to rehabilitate Russian liberalism in the public eye.”

Baroness Kishwer Falkner, Vice-President of Liberal International and member of the House of Lords, in her speech recalled that since the crisis of 2008 and the following recession populist and nationalist movements and parties had been on the rise, they offered very simple solutions to very complex problems.

She also noted that conservatism could become very popular in the critical moments, as it is always easier for people to focus on the past. But this is not true, as life is changing all the time. The conservatives often say, “Stop the world, I will get off”. But the danger is not so much in conservatism, but in its relation to nationalism,” she said. “Patriotism is love to the country. But if you use patriotism as a cover for nationalism, then you need to worry: a patriot loves his country, but a nationalist hates his neighbours,” Kishwer Falkner said.

History teaches us that nationalists had no solutions to the problems, they only led to conflicts, and there was no progress, Baroness Falkner stressed expressing her concern that Russia was moving in that wrong way.

“Countries can not exist in isolation, so we create organizations and join in alliances. Now in the period of glbalisatoin all countries depend on each other. Over the past 15 years, over 500 million people came out of poverty, thanks to globalisation. Liberalism combined with capitalism – this is the answer,” she said.

“If you look at Russia’s response to the changes in the world, Russia cancels international agreements, it shows lack of respect for international law and sovereignty of its neighbors,” Baroness Falkner said.

“Russia is leading a war, but does not allow its soldiers to carry clear identification marks of its army. But who will pay for Russia’s retaliatory sanctions? Ordinary Russians, not the oligarchs and Putin,” she said.

“It is easy to start a war, but it is difficult to get out of it. War costs money, it is worth the lives of young people,” Kishwer Falkner added.

Concluding her speech Baroness Kishwer Falkner urged Vladimir Putin to admit his mistakes, not to put pressure on the media and not to suppress the protests. “Why, Mr Putin, are you afraid of your citizens, why do you not allow them to join organizations, why do you adopt laws that do not allow them to express their opinion?” she asked.

“Self-isolation seems to be the decision taken by the Russian authorities, while the rest of the world has been integrating. Even powerful China has been trying to become a full member of the international trade, because they understand that they can not survive alone. We – Liberals – should be together, should support each other. The situation will change, isolation can not last forever,” she concluded.

ALDE Vice President Olle Schmidt noted in his speech that the achievements from a global economy were questioned in Europe and that “results from the EP elections this spring indicated a fear and an increasing tendency to lean on nationalism and protectionism”.
He stressed that liberals had developed solutions to such problems, “We liberals know that an interdepending global economy with free trade is essential for freedom, democracy, wealth and prosperity. Nationalism and isolation are the worst enemies to our liberal values. And we have to come up with good answers. Market economy is not Wild West capitalism – with everyone on their own! On the contrary! A decent market economy includes fundamental liberal values as a fair distribution of wealth, an inclusive and egalitarian policy for all. I would specially point out a policy including women in all areas. We need also have policy to include the increasing number of immigrants. Diversity is good for the economy.”
According to Olle Schmidt the distinction between liberals, conservatives and socialists was as follows: “The conservatives they have neither the ideas nor the social inclusive perspective. The socialists they always tend to call for a stronger state that solves all the problems. But we liberals we have to combine a belief in individual capacity as Lord Dahrendorff expressed – Chances of Life – with a social and inclusive way of giving citizens a decent life. We could call it social liberalism.”
Criticising authoritarian leaders, Vladimir Putin inclusive, Olle Schmidt quoted President Abraham Lincoln: “You can fool some of the people all of the time, and all of the people some of the time, but you can not fool all of the people all of the time!” The liberal answer for that should be a good society with responsible citizens, where economic liberal values matters. The society can never be sustainable without democracy, tolerance and freedom of speech.

Videorecording of all the conference with English simultaneous translation 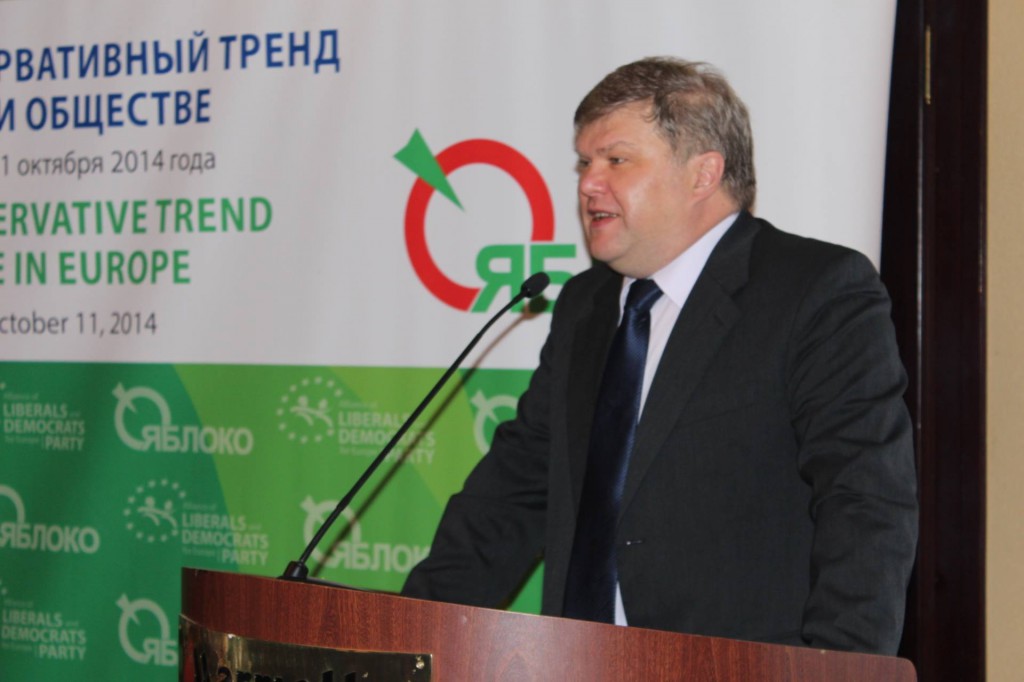 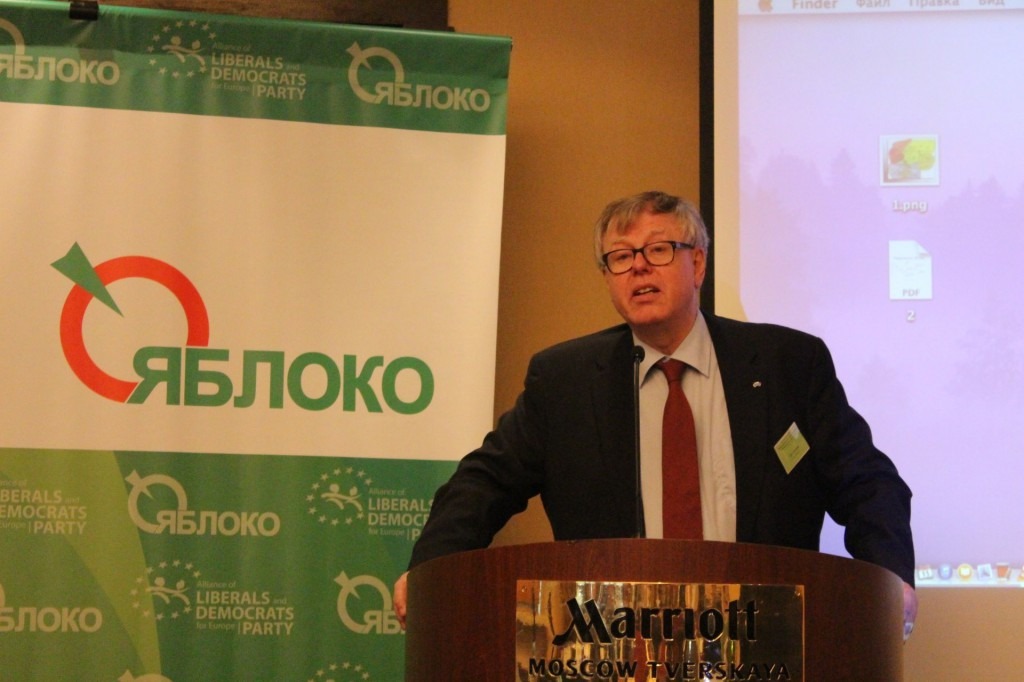 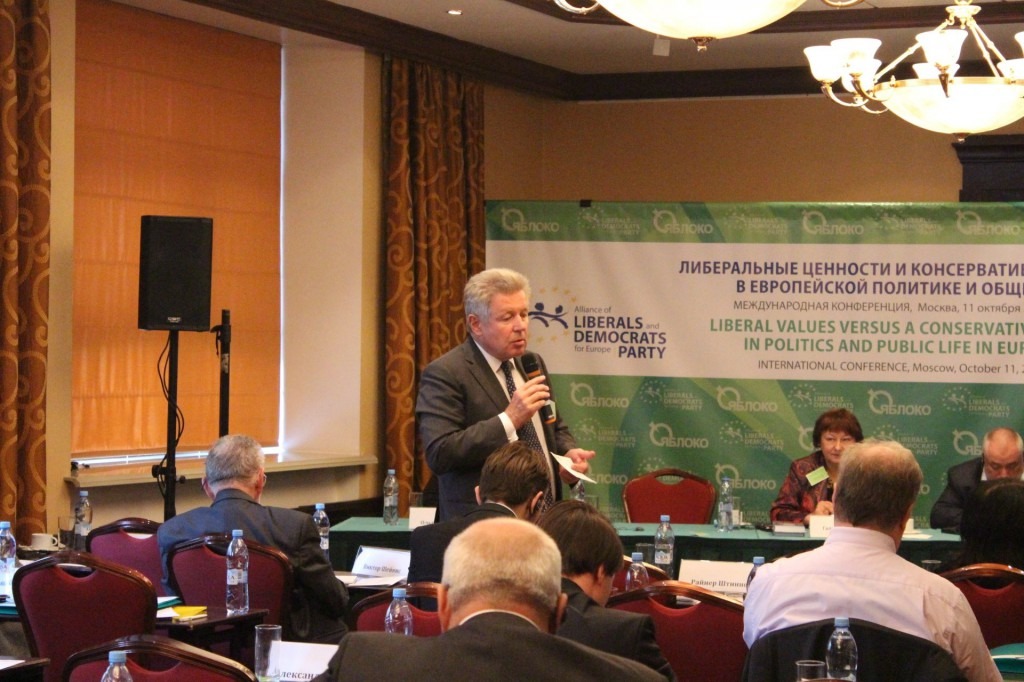 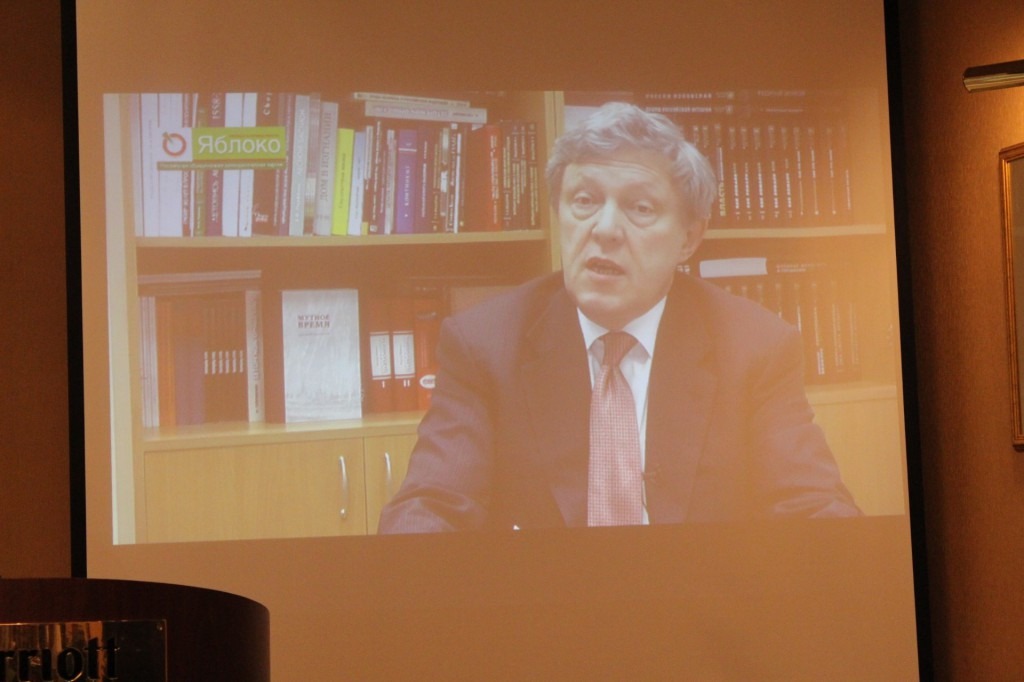 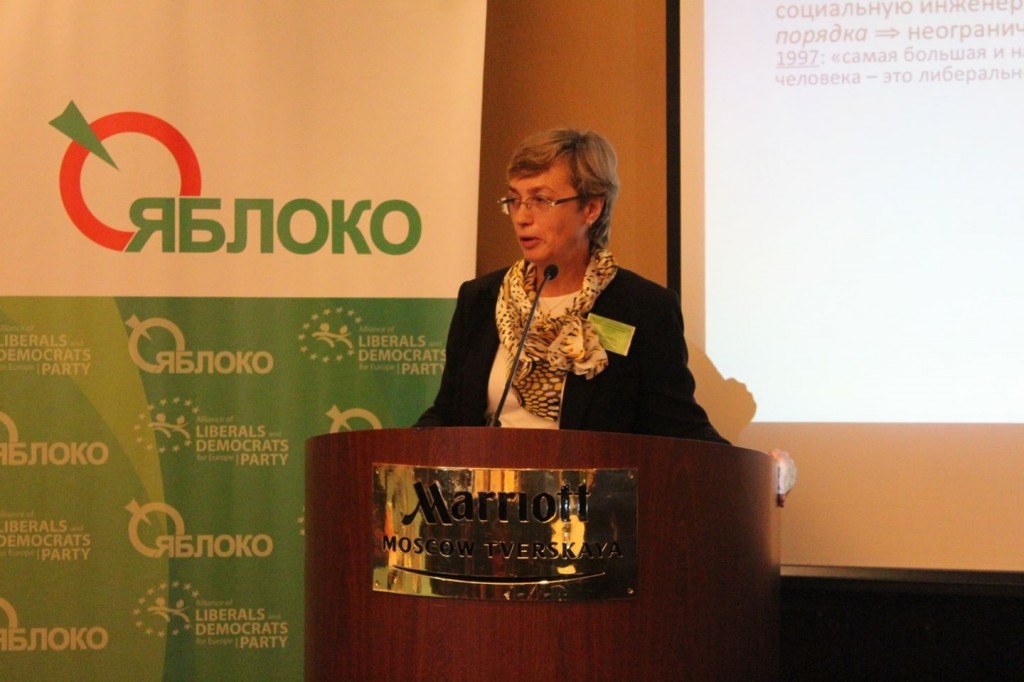 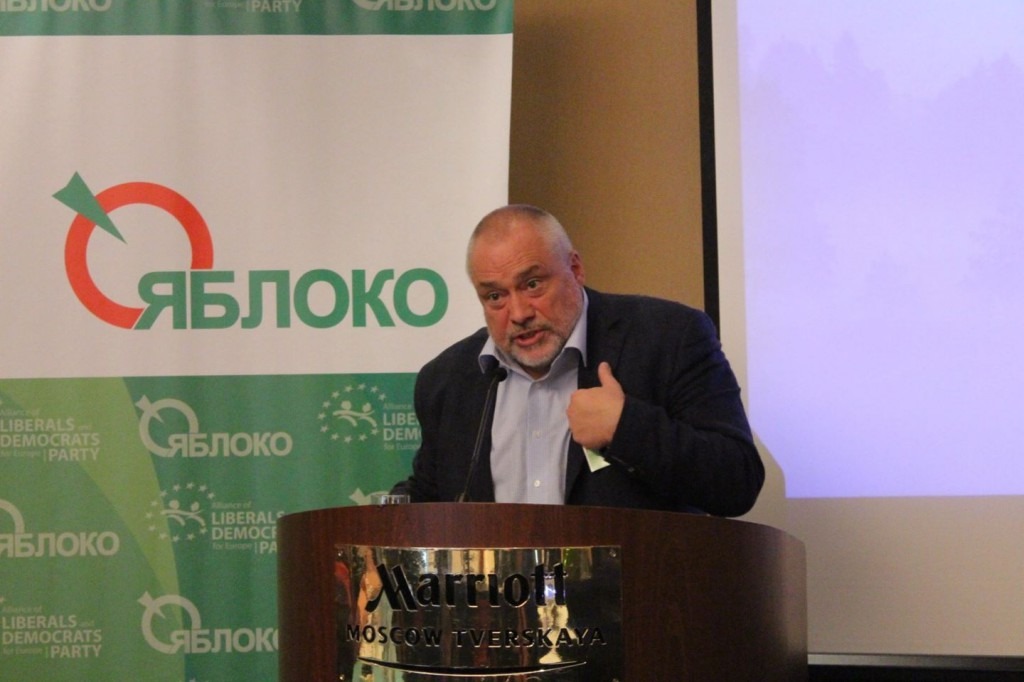 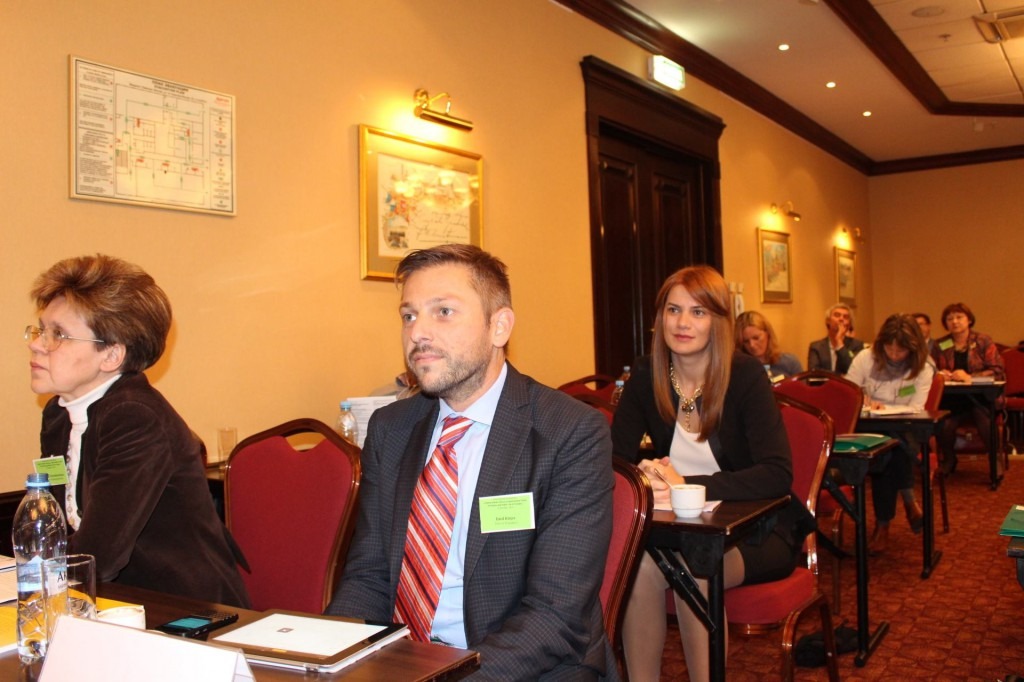 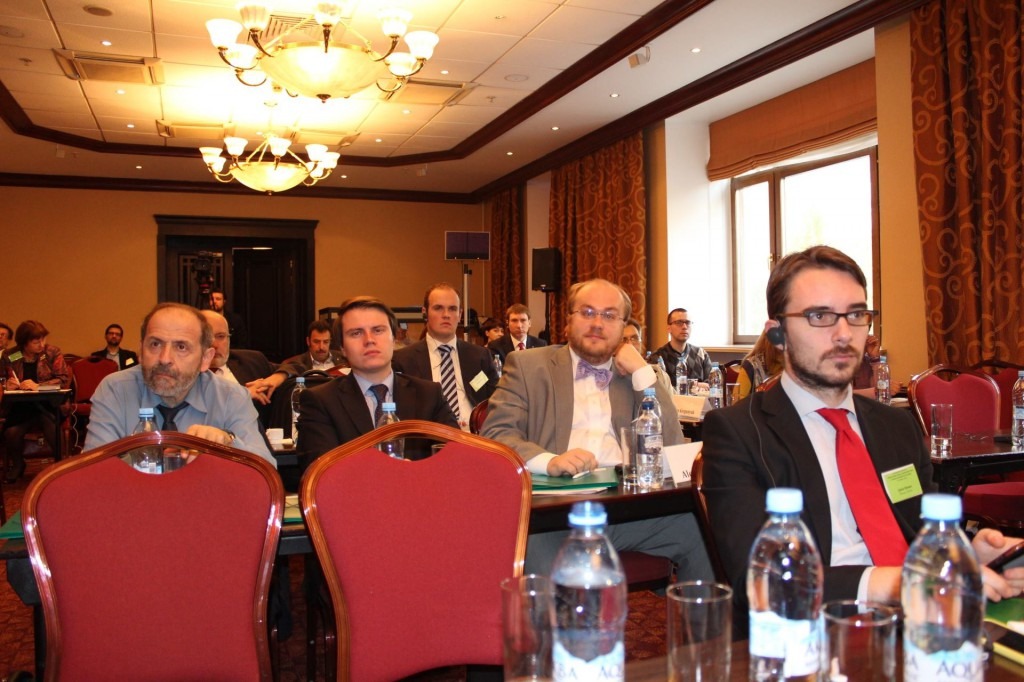 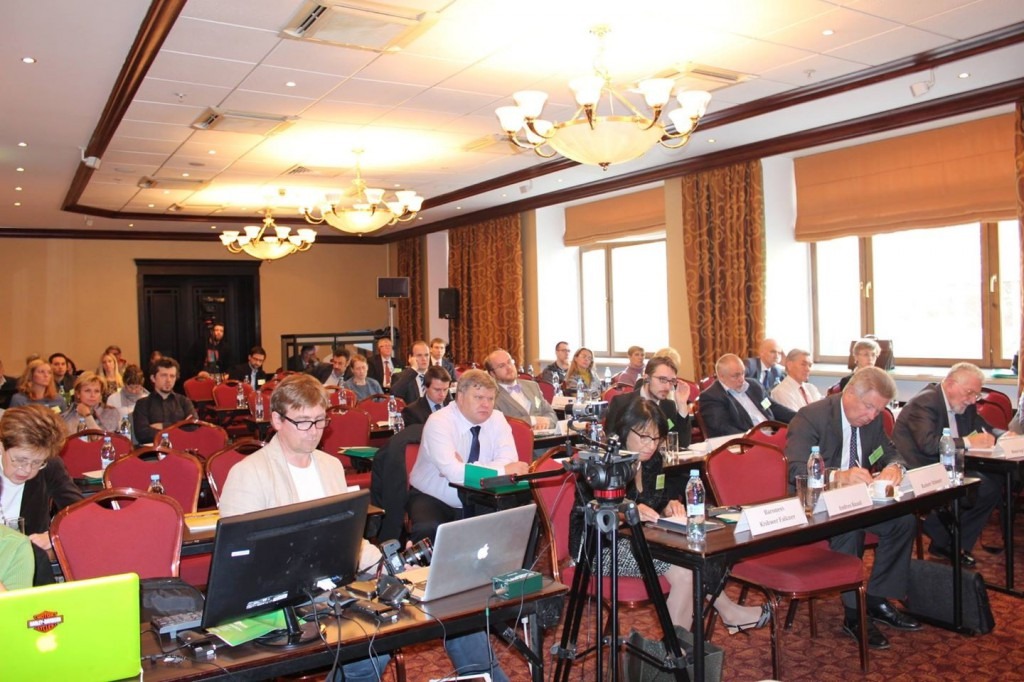