At present Russia faces two threats: a war and an economic collapse, said YABLOKO founder Grigory Yavlinsky. Speaking at the Federal Council of the YABLOKO party on Saturday, he proposed a programme of countermeasures. According to Yavlinsky, one of such measures should be resignation of the government and appointment of Alexei Kudrin, ex Finance Minister, Chair of the government.

Russia’s strategic task in economy and politics should be a change of the political course: rejection of the so-called «Eurasian vector» and returning to the European way of development, stressed Grigory Yavlinsky. He said that “this is the problem of the future [of the country]” which Russia would “approach either through a great crisis, or through elections in 2018”.

Yet the prime task is to avoid the war. Realisation of this task implies, first, that presidents of Russia and Ukraine should begin direct talks on the implementation of the Minsk agreements, including withdrawal of all illegal armed groups and mercenaries from the territory of Ukraine. Second, the gas problem should be resolved: Europe should buy gas on the Russian-Ukrainian border, then the issues of timely and complete payment for gas deliveries will be solved by Ukraine together with the EU. Third, it is necessary to find a solution on the free trade agreement between Russia and Ukraine in view of Ukraine’s association with the EU. «It’s certainly a challenge, but such problems are solved by the customs. In any case, it’s better than smuggling through Belarus and Kazakhstan, when we get kiwi, bananas and shrimps as Belarusian products,» Yavlinsky said.

In addition, Yavlinsky once again proposed that an international conference on Ukraine and, in particular, on the problem of Crimea, should be conducted. According to Grigory Yavlinsky, this conference would prepare a decision on Crimea, which could be recognised by all the sides. He also reiterated that YABLOKO had been insisting on the fact that Crimea still had been a territory of Ukraine, and a new referendum should be conducted there in compliance with the Ukrainian law.

According to Yavlinsky, in order to save Russia’s economy from a collapse, Russia should achieve that sanctions against it are abolished and try to influence the solution of the oil prices problem. To achieve lifting of sanctions Russia needs to do the same thing as for stopping of the war, and to solve the oil problem Russia should join the struggle of the international community against the Islamic State of Iraq and Greater Syria (ISIS).

According to Yavlinsky, «ISIS plays a big role in setting the oil prices”: the annual budget of the terrorist organisation amounts to 2 – 7 billion dollars, most of the amount representing incomes from oil smuggling to Iran, Turkey and Syria. «Former sponsors of ISIS, such as Qatar, Saudi Arabia and Kuwait, began reducing oil prices so that to protect their markets from oil smuggling, and thus created markets meltdown,» Grigory Yavlinsky said.

Yavlinsky also insisted that Russia needed a substantive dialogue with the rest of the world. «To date, there has been no dialogue, all the formats [of negotiations] which were there were very limited, composed of propaganda and generally closed to the public. Absence of such a dialogue is counterproductive and very dangerous, » he said.

«Great European Russia can not develop steadily and for a long term as a separate Kingdom of Moscow seeking a strategic alliance somewhere in the depths of Southeast Asia,» he added.

To establish civil, experts and policy dialogue Yavlinsky offered the resources of his party, in particular, he noted that Acad. Alexei Arbatov, a world-renowned expert on international relations and member of the YABLOKO Political Committee, could engage in that.

Yavlinsky also noted that YABLOKO representatives had such advantages as «high level of professionalism, deep understanding of Russian national culture, the economy, social and political conditions, possible reasons for escalation of conflicts, but, most importantly, there is trust to us, and without trust these problems are unsolvable».

In addition Yavlinsky suggested that «the work of the Foreign Ministry which became the «Ministry of Propaganda» should also be changed», also all the officials responsible for foreign policy in the State Duma and the Federation Council should be replaced.

In order «to reduce the risks, and move away from further escalation», Grigory Yavlinsky proposed that «rapid and significant personnel changes» should be made, in particular, the government should be changed. «It is not that important whether the [entire] government or only its economic bloc [is replaced]. But in our opinion, only such politician as Alexei Kudrin has the real knowledge of the financial sector and professional ability to solve the problems of devaluation of the rouble, and can oppose rampant inflation and stagflation in Russia in the present political environment. He could become Prime Minister or First Deputy Prime Minister with special political powers,» Yavlinsky said. Grigory Yavlinsky’s proposal to nominate Yevgeny Primakov Prime Minister was adopted after the default of 1998 and proved a success.

In addition, Yavlinsky insisted on creation of a «special public body for strategic development of the military security policy». According to Yavlinsky, «there are indeed serious threats to Russia’s security. But they have no relation to the NATO troops in the Baltic States. They come from an absolutely different side». 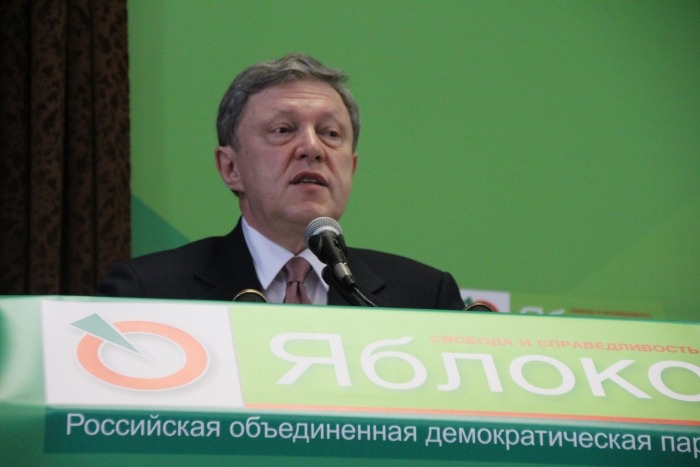