A series of erroneous decisions and miscalculations of the government is explained by the inability to correctly understand and assess the key trends in the world oil market development, especially after 2009
Aggregate growth of oil production in the world and in the US in particular;
Emergence of a powerful market vector of slate oil extraction;
Demand drop due to the progress in the energy saving and increase of alternative energy production (biological fuel in the first place) resulting in the dramatic change of the demand and supply balance for liquid hydrocarbons;
Absence of adequate conception of the division of political forces around the oil market, i.e., who profits from high oil prices and who profits from low prices, the scopes and the vectors of oil smuggling and the role of the so called “Islamic State” in these flows.
This is not a complete list of blunders that led to the adoption of a series of erroneous decisions by Vladimir Putin’s and Dmitry Medvedev’s in the energy field in the recent years.
Speaking about the details of this shameful failure, we should say that one of the main reasons was that official and experts’ forecasts of a considerable part of Russian specialists and «strategists» made a mistake of including into their analysis of the prospects for oil prices all the marginal costs, that is all the expenditures on exploration and development of a new deposit.
Looks like calculations of different experts are based on this, and according to these estimates, the prime cost (marginal cost) of oil fluctuates between $ 80 to 110, and that is why «the price can not be less than 90». This prime cost is certainly important in the long term. At the present prices, the development of new fields in the United States, Canada and many other places will really stop some day, and this will lead to a new round of price increases.
The question is when it happens.
It depends on how long it will be possible to get oil from the existing fields and how many new fields are already under development, which is less cost-effective to stop than extract it even at these or even lower prices. Again, there are different points of view, but in general, geologists agree that the peak oil production in the United States (which has increased by four times for the past ten 10 years) will fall on 2017 — 2018 and may begin declining thereafter («traditional» oil fields may pump oil up to 20 years, but slate oil fields may have a shorter life cycle, if this is so, then the present «overproduction crisis» will last not for 15 years, as in the 1984 — 1999 biennium, but may last for ten or even seven – eight years, but certainly not a year or two).
In a short or medium term (those same 7-8 years or more) the decisive factors will be marginal cost variables, or as oil analysts call them, «cash costs» (as opposed to the «marginal costs», although the first should be referred to as «marginal variable costs» from the point of view of economic terminology), rather than aggregate marginal costs. This is what is necessary in order to cover the costs of production and delivery of oil to the consumer from the oil deposits that have already been developed, and these are much lower — under $ 30-40 per barrel in the US, Canada, and maybe even in China. This is the price level when production at the existing fields will be suspended.
The chart below shows that over 80 per cent of the world production is profitable at a price of around $ 30 per barrel. Basing on this estimate, we can conclude that the price will reflect marginal variable costs of $ 20 (the lower margin) to $ 50 (the upper margin) per barrel. Thus, today the markets approached what will soon be the top (not the bottom!) margin. 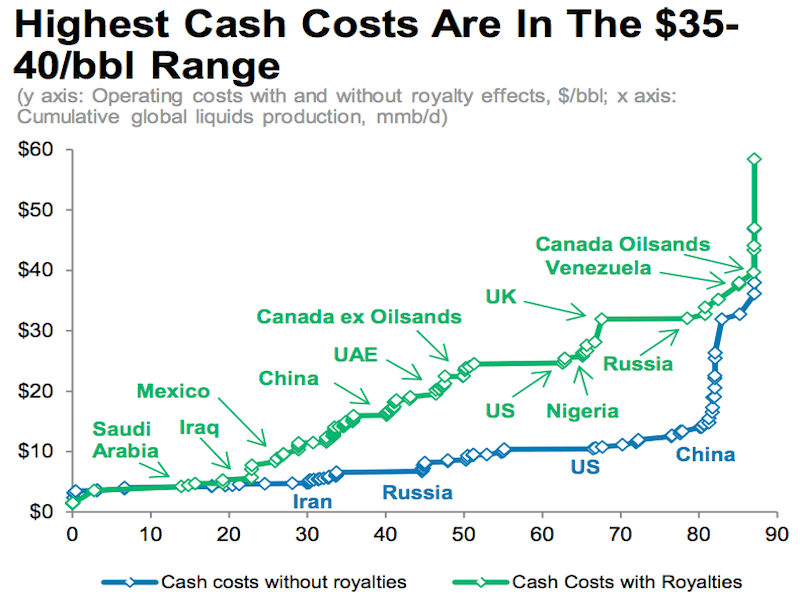 The cash costs (the prime cost) are basically what is spent on the maintenance of oil extraction, rather than what is needed to make oil extraction profitable or meet the budgetary needs of the government.
According to Myles Udland, author of the article in Business Insider (see the Source to the chart above), «As you can see on the far right, the Canadian oil sands and the US shale basins are very expensive to tap. Meanwhile in the Middle East, the Saudis, the Iraqis, and the Iranians basically stick a straw in the ground, and oil comes out»

What we see happening now is an excess supply of oil, which puts pressure on oil prices, and many expected that in response OPEC would announce cuts in production. That did not happen, partially because of taking into account the experience when Arab policies of reducing oil production in 1970s did not lead to an increase in oil prices, but led to the bankruptcy of the budget of Saudi Arabia. Therefore, fight against low prices does not mean mere reduction in production. According to oil analyst Adam Logson (see the Source to the chart above), «»Simply slowing supply growth is usually not enough to balance an oversupplied market in the short run. In commodities without a cartel, existing production must be shut-in. If true, marginal cost of investment is not the relevant metrics, it’s variable operating cost, which is closer to $35-$40/bbl on the high end.»

Conclusions
1. Oil prices are likely to be at the level of $ 20 – 40 in the next 5-7 years. This is mainly the result of objective economic developments in the world markets and an energy breakthrough in the United States. A political factor is probably present in this price reduction: break of relations and confrontation between Russia and the United States, as well as the anti-Syrian oil Arab countries, which might have led to a rapid fall of oil prices in connection with the task to push Russia (and Iran) away from the oil markets by means of undercover arrangements and informal sanctions.

2. Even a quick analysis shows that all the developments (except for the sanctions) have been evident for at least past five or six years. Unpreparedness for such a development is a consequence of an extremely incompetent management, poor quality of analytical work, unprecedented amateurish level of discussion of technological and economic aspects of the modern international and the Russian energy policies in the Government. Suffice it to say that in autumn 2014, the budget was adopted on the basis the estimates that oil price would be at $ 97 per barrel.

3. Low oil prices coupled with economic sanctions and taking into account serious fundamental economic problems of the Russian economy suggests that 2015 will see further devaluation of the rouble against the dollar, decline in production, inflation and, as a consequence, growth of social tensions.

Russia’s ongoing military-political gambling in Ukraine in 2014, absurd anti-European policies and incompetent management make a way out of this situation virtually impossible.

For Russia, taking into account its economic problems, this can lead to an economic disaster.